A young journalist from Tamil Nadu, Maga Thamizh Prabhagaran, who was touring in the North was arrested by the occupying Sri Lankan military and the SL police Wednesday noon, while he was talking to the parish priest of St. Antony’s Church in Ponnaavea’li, news sources in Vanni said. The Indian journalist visiting the island on tourist visa was together with Tamil National Alliance (TNA) parliamentarian S. Sritharan, Northern Provincial Council (NPC) member S. Pasupathipillai and Karaichchi Piratheasa Chapai (PS) member S. Thayaparan during the detention, interrogation and arrest, the news sources further said. 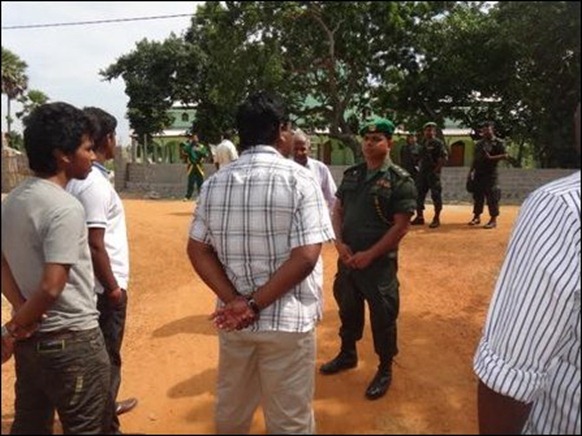 The journalist, who had earlier visited the island and authored an article in Junior Vikatan, was this time visiting the island on tourist visa to make a round trip as a visitor to North and East.

TNA parliamentarian Sritharan had a meeting with the people of Ponnaave’li around 11:00 a.m. and was visiting Vearavil, Ponnaave’li and Valaippaadu villages in Muzhangkaavil area. The accompanying visitor from Tamil Nadu had also taken some photographs of the living condition of the people in these villages.

More than 50 Sri Lanka Army soldiers surrounded the church around 1:30 p.m. and detained the journalist together with the TNA politicians. The SL military seized the cameras from the politicians and the visitor while the SL police took them to Jeyapuram Police station. After more than 4 hours of the interrogation at the police station, the TNA parliamentarian and the councillors were released after their cameras were inspected. The TNA politicians were later released, but Thamizh Prabhagaran was detained.

He has been subjected to lengthy interrogations by the SL military intelligence operatives, informed sources said. His communication with outside world has been cut off.

In recent times, the SL military intelligence operatives, deployed in the name of ‘Terrorist Investigation Department’ of the SL police, have been harassing, detaining and deporting journalists and other activists who visit the island in tourist visa and interact with local journalists or politicians in the North and the East.

Questioning the motive of Colombo’s interrogators, the NPC councilor Mr Pasupathipillai blamed the SL military and police for banning the interaction between the tourists and the people in the North. He also questioned why those on tourist visa cannot be present with the democratically elected representatives of the people while they were touring the North.