While Tamil Naitonal Alliance (TNA) parliamentarians are asked by the Washington and London to lobby Australia and India to gain support to the watered-down resolution to be tabled in Geneva later this month, the occupying Colombo has managed to mobilize 750 Tamils, through various manipulations, to march in a rally carrying placards in support of SL President Mahinda Rajapaksa, news sources in Ampaa’rai said. Sri Lankan military operatives, extremist Sinhala Buddhist Bodu Bala Sena (Buddhist Power Force) activists, Samurdhi and Devineguma ‘development’ workers were deployed to bring Tamil people from various villages of Ampaa’rai district to the pro-Rajapaksa rally staged in Kalmunai. In an orchestrated move, media personnel were brought from Colombo to witness the manipulated rally at Kalmunai. 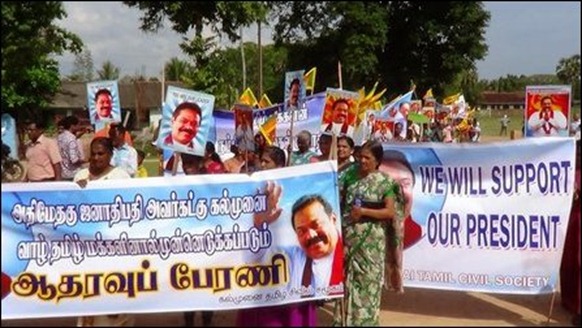 The Tamil National Alliance (TNA) held a press conference at Kalmunai on Thursday to clarify the hidden agenda behind the demonstration.

After engineering a split within the Tamil civil society in Kalmunai Tamil division, the SL military ‘counter-insurgency’ stalwarts in Ampaa’rai have obtained support of one of the two civil society factions to work with Bodu Bala Sena.

The ‘carrot’ given to the collaborating civil group was that their division would be upgraded to not depend upon the Muslim division, which has been a impediment to the Tamil division in the governance of local affairs.

In the meantime, Tamils in remote villages were threatened by the SL military operatives to get on board the vehicles to take part in the rally if they wanted to continue to receive Samurdhi benefits from the SL Ministry of Economic Development run by SL presidential sibling Basil Rajapaksa. 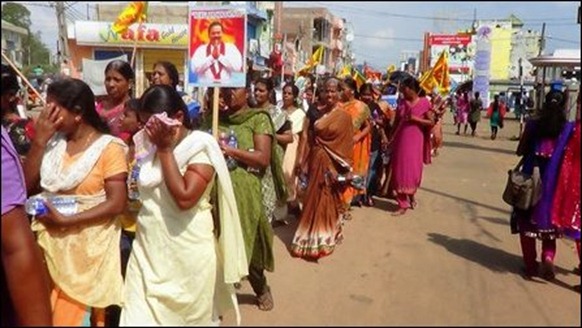 The pro-Rajapaksa rally began at 9:00 a.m. from the grounds of the Wesley High School towards Tharavai Pi’l’laiyaar temple and from there to the DS office.

Kalmunai Divisional Secretary K. Lavanathan was instructed to have the DS office operating on Sunday and all the employees were ordered to report for work. 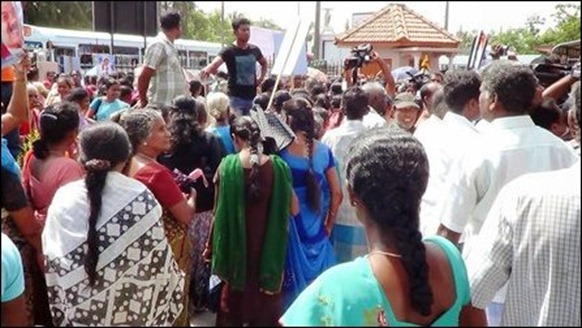