The United Nations is to launch an investigation into alleged war crimes and continuing human rights violations in Sri Lanka.

Five years after the island’s 26-year-long civil war ended, the UN Human Rights Council in Geneva has voted in favour of a US and UK-led resolution mandating the office of the UN High Commissioner for Human Rights to undertake "a comprehensive independent investigation."

This is a victory for the people of Sri Lanka who need to know the truth. David Cameron

Not a single person has so far been held to account for serious violations of international law during the conflict.

This investigation will cover the last seven years of the war, including its denouement, which ended in a bloodbath. The UN says at least 40,000 Tamil civilians were killed in the final few months, mostly by government artillery.

At the 47-member Human Rights Council, 23 countries voted for the resolution and 12 against. There were 12 abstentions (see graphic, below).

A turning point for the battle for the human rights of the Tamil people. Jan Jananayagam, Tamils Against Genocide

David Cameron, who had championed calls for an independent international investigation into allegations of war crimes in Sri Lanka, responded to news of the vote saying: "This is a victory for the people of Sri Lanka who need to know the truth about what happened during those terrible years of the civil war so that they can move forward.

"Today’s outcome has been triggered by the failure of the Sri Lankan government to stand by its promises to credibly and independently investigate alleged violations on both sides during the war." 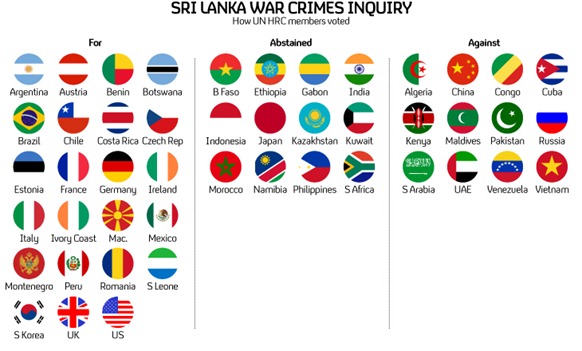 The prime minister said he was "proud of the crucial role that Britain has played to secure this outcome. I said in November that we would achieve more by standing up for our values rather than sitting on the sidelines. And that is exactly what we have done."

Jan Jananayagam, director of the campaign group Tamils Against Genocide welcomed the resolution as what she called "a turning point for the battle for the human rights of the Tamil people." It was a step towards justice, she said, for those who lost loved ones during "the mass atrocities committed in the final phase of the civil war."

"A page has been turned," she told Channel 4 News. "Now we enter a new phase in the battle to preserve evidence, protect witnesses and to uncover the full truth of events."

There were concerted efforts by countries opposed to the Geneva resolution to stop the vote going ahead altogether, led by China, Pakistan, Russia and Cuba.

At one point, a separate vote was taken on a Pakistan-led proposal to delay any consideration of the resolution on the basis that the Office of the High Commissioner for Human Rights did not have the funds to fulfil its mandate. This was rejected.

This inquiry is long overdue. It will shed light once and for all on the atrocities that took place during the last phase of the war in Sri Lanka. Julie de Rivero, Human Rights Watch

India, which has voted in favour of past resolutions criticising Sri Lanka’s human rights record, chose to abstain in the main vote, however. Speaking before the voting took place, it’s ambassador described the resolution as "intrusive," saing it had "the potential to hinder efforts" towards reconciliation.

The resolution narrowly missed being adopted by an overall majority of members, which would have required 24 or more countries voting in favour.

In advance of the vote, the President of Sri Lanka Mahinda Rajapaksa, had said he was "unconcerned about the outcome of the Geneva election." He said that the "people would win" regardless of what happened at the Human Rights Council. The result will be a severe blow to the government of Sri Lanka however.

It has vigorously opposed all efforts to initiate an international inquiry. In recent days human rights activists, whom the government has suspected of lobbying for an inquiry, have been rounded up in Sri Lanka and interrogated under anti-terrorist laws.

Julie de Rivero, the Geneva-based Advocacy Director of Human Rights Watch, told Channel 4 News: "This inquiry is long overdue. It will shed light once and for all on the atrocities that took place during the last phase of the war in Sri Lanka.

"It is a necessary step," she said, " that will help hold the Sri Lankan government and the Liberation Tigers of Tamil Eelam (LTTE) to account for the crimes they committed."

Fred Carver, director of the London-based Sri Lanka Campaign for Peace and Justice said: "For the first time, the international community has demonstrated that they care what the government of Sri Lanka does with respect to human rights.

"If you are a soldier in northern Sri Lanka right now," he said, "you will be thinking twice about how you behave when you enter a Tamil village."

Sri Lanka’s President Mahinda Rajapaksa has rejected the UN vote. In a phonecall with AFP, the president, credited in his country with ending the civil war, said:

"We reject this. This resolution only hurts our reconciliation efforts. It does not help.

"But I am not discouraged. We will continue with the reconciliation process I have started."

Sri Lanka’s Ambassador to the UN in Geneva, Ravinatha Aryasinha, told delegates to the Human Rights Council that his country believed the resolution was "partisan." He said Sri Lanka "categorically and unreservedly" rejected it. The resolution, he said, violated Sri Lankan sovereignty and international law and would, in his view, "set a dangerous precedent."

Today marks an important moment in the fight against impunity in Sri Lanka. Keith Best, Freedom from Torture

Mr Aryasinha also complained that the investigation’s mandate to investigate alleged crimes as far back as 2002 did not go back far enough. It meant, he said, that it would exclude "the atrocities of the LTTE prior to 2002."

Lobbying and horse-trading over the wording of the resolution had been intense in recent days.

Some human rights organisations and Tamil groups had expressed disappointment that the resolution did not call for the establishment of a specific tribunal or Sri Lanka’s referral to the International Criminal Court in the Hague.

Diplomats involved in drafting the resolution said the final wording had to accommodate the fact that members of Human Rights Council included many countries who opposed the establishment of any investigation.