The current situation in Sri Lanka is not structural genocide and the Tamil diaspora was “pushing too hard” with this terminology, claimed ICG’s former President Gareth Evans at a workshop on crises, at the University of Essex, UK on Saturday. Continuing his response to a question raised from the audience on the total failure of the R2P in the island, Gareth Evans was of the opinion that the GoSL “was not behaving well” and that continued “international pressure” was required to make the government more accountable. However, when questioned by TamilNet on the applicability of the third pillar of the R2P to protect the nation of Eezham Tamils in the future from the on-going structural genocide, he was of the opinion that though it is possible that the situation might deteriorate it was “premature to be talking about Responsibility to Protect right now.”

The US-led Establishments that directed the Vanni War, refuse to accept the war ending in genocide. The International Crisis Group (ICG) that was opinion-making in the lines of the US-led mobilisation, before and during the Vanni War, came out with a challenge to Eezham Tamils in 2012 that it was up to the victims to prove the genocide. This was told by ICG’s Alan Keenan in answering a question by TamilNet. Now, the ICG’s former chief Gareth Evans, who was directing the organisation at the time of the Vanni War, denies even the ongoing genocide or the structural genocide of the post-war times.

Gareth Evans who pioneered the R2P concept, when it suited the needs of a system, now says that the atrocity situation to evoke R2P doesn’t exist at the moment in the island. When questioned, he didn’t say ‘yes or no’ on the existence of such a situation before. Whether the series of these stands are stages of an agenda of seeing the completion of the structural geoncide, silencing all voices and claiming in future that there is no conflict anymore, so that a world paradigm could be engineered in this regard by sheer denial, bulldozing even the need for investigation, responded ICG Watchers in the diaspora.

Obviously, this will be the course of affairs when any investigation is hijacked by the very perpetrators, whether in the island or in the international arena. This has to be carefully perceived by sections that argue for coursing the struggle of Eezham Tamils by expecting justice from the perpetrators or by compromising with them, without appropriately meeting the challenges posed by them. By doing so, they not only misdirect the struggle, but also lose a historic opportunity of universalising the dialectical values behind the struggle to the benefit of entire humanity, political observers of the struggle of Eezham Tamils commented. 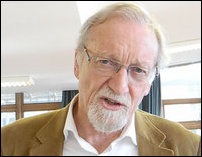 Gareth Evans was the former CEO and President Emeritus of the ICG. He is also a former Foreign Minister of Australia. In June 2009, he joined the University of Melbourne as an Honorary Professorial Fellow in the School of Social and Political Sciences.

As one of the theorists of the West, who has contributed to the development of R2P as it stands today, Gareth Evans was invited to the University of Essex as a speaker at a workshop on crises, where he presented on the history of the R2P and the debates around it.

Evans was of the opinion that the third pillar had to be sparingly used, considering the costs and benefits of a military intervention.

A member from the audience referred to “The United States and R2P” report by Madeleine Albright and Richard Williamson that called on the US to take a more proactive role in implementing R2P but implied only on applying the first and second pillars to Sri Lanka. The member also referred to the Bremen-PPT report that indicted the GoSL of genocide and ongoing genocide, and the US-UK for complicity.

Referring to the above, the member questioned Gareth Evans if R2P as a whole failed as regards to the Tamils in the island and if so, what should the International Community do to compensate.

Gareth Evans did not give a “yes or no” answer as regards the failure of the R2P in the island of Sri Lanka.

He only responded that though the Sri Lankan military “behaved disgracefully” towards the end of the war, the Sri Lankan government got away with it as their narrative of “terrorist insurgency” was accepted by the international community.

He added that the willingness to support Sri Lanka was fast evaporating, especially among the US and the UK, and that Australia’s ties with Sri Lanka were “disgraceful”.

However, he was of the opinion that the argument of “structural genocide” does not apply to Sri Lanka, further stating that the Tamil diaspora was “pushing too hard” with this claim. The Sri Lankan government was “not behaving well” owing to its repression in Tamil areas, but it was not genocide. He concluded that continued “international pressure” was needed to make the Sri Lankan government accountable.

When asked by TamilNet if he envisages a situation in the future where the third pillar of R2P could be applied to protect the Eezham Tamils in the island of Sri Lanka, he opined that it was “premature to be talking about Responsibility to Protect right now” reasoning that an “atrocity situation at the moment” does not exist in Sri Lanka. But it was “perfectly possible that the moment would deteriorate if the political aspirations of the Tamil people are not recognized by the government of Sri Lanka.”

He refused to speculate on a “deterioration” of the situation which would call for an invoking of the third pillar of the R2P.

Likewise, he also refused to speculate a timeframe for the application of Remedial Sovereignty for the Tamils in the island.

His emphasis again was more on the international community making the Sri Lankan government more accountable.

In a striking contrast, in the course of the conference, he admitted the failure of the R2P in Syria.

He recognized that keeping the option of military intervention aside, the failure to impose other measures like arms embargoes and economic sanctions had given Assad a sense of impunity.