After 10 years, India is getting a political prime minister of his own stature, routing out the Sonia-Rahul-Priyanka Congress Party, the government of which was run by a puppet prime minister and extra-parliamentary elements such as National Security Advisors, intelligence officials and bureaucrats. Apart from the debate on BJP’s Hindutva polity and the impact that might come with the brute majority given to it, the past experience of Eezham Tamils is that Non-Congress governments were much better in post-Indira Gandhi times. Mr. Narendra Modi’s predecessor Mr. A. B. Vajpayee earned the respect of Tamils, despite the virtual non-existence of his party in Tamil Nadu. Mr. Modi must have surely got the cue about the expectations behind the unprecedentedly overwhelming victory of Ms. Jayalalithaa in Tamil Nadu. 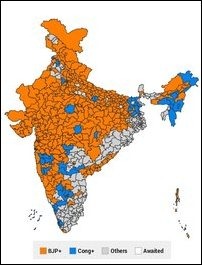 A cartographical depiction of the poll pattern would tell the realities about what is meant by ‘national’ political parties in India.

Leaving Karnataka, where a regional party is yet to emerge, almost the entire South India and the larger part of Eastern India have voted for parties other than the BJP and Congress. While the ADMK, TRC and BJD, respectively swept through Tamil Nadu, West Bengal and Orissa, the TDP (BJP ally), TRS and YSRC (the last two are recently formed) have shared Andhra and Telangana.

In Tamil Nadu, Ms. Jayalalithaa has proved a point in a remarkable way, by standing alone and winning 37 out of 39 seats. The subconscious sentiment in the polarisation is no secret.

The Tamil Nadu State Assembly, led by Ms. Jayalalithaa, has steadily been pursuing certain demands through unanimous resolutions repeatedly enacted. New Delhi and the so-called national parties persistently refused to respect the sentiments of the people of Tamil Nadu. 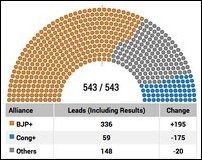 The Sonia Congress-led New Delhi Establishment, well known for its complicity in the genocide and on-going genocide of Eezham Tamils, came out with responses that were utter ridicule of the righteous sentiments in Tamil Nadu. It didn’t stop such acts even in the last minute of its exit, raising suspicions whether it was a government or personal whims and fancies of an extra-parliamentary junta that was handling the affairs of Eezham Tamils.

Proving a change of course in the foreign policy and in the implementation of it in the international arena may take a little time for the new government. But, Mr. Modi could come out with an immediate gesture of respecting the Tamil Nadu Assembly and the current Lok Sabha mandate in Tamil Nadu, by instituting an inquiry into the conduct of the past two Congress governments since 2004, on the affairs of the island. 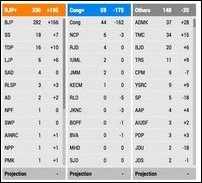 Whatever the process and outcome of such an inquiry, bringing some key persons to accountability would certainly kindle a national discourse on Eezham Tamils that is hitherto suppressed, would bring in a national consensus on what to do, and would make extra-parliamentary elements and interests not to dare in future in meddling with a nation to the extent of the disappearance of 1,46,000 people.

Mr. Modi may have to be particularly careful about the line of Sushma Swarajs and Subramania Swamys in the party, and foundations like the ORF and corporate interests irresponsibly bulldozing righteous needs of the Eezham Tamil nation facing genocide and annihilation in the strategic neighbourhood. There is a lot of anger on the way the BJP was playing paly-paly with Rajapaksa and genocidal Colombo.

Reflecting on the 2014 elections, there is an opinion that had the change in the political will been seen in May 2009, a disaster could have been avoided or minimised in the island.

The last five years have seen a brutal and resolute engineering aimed at causing irreversible effects against the nation of Eezham Tamils, in the forms of militarisation, colonisation and structural genocide – all in active complicity of New Delhi.

The immediate task of Ms. Jayalalithaa is to make India to stop the structural genocide, followed by bringing in conditions for Eezham Tamils to exercise the right to self-determination.

Ms. Jayalalithaa getting the unprecedentedly overwhelming victory is largely due to a subconscious feeling in Tamil Nadu that the State, ignored of its sentiments by the Centre, should get a united strength to change the course at the Centre. Tamil Nadu failed to do that in 2009. Now, when it has done it, whether it would go wasted in the context of BJP getting absolute majority, is an anxiety, say political observers in Tamil Nadu.

Mr. Modi and Ms. Jayalalithaa have expressed mutual cooperation after the elections. Mr. Modi may still need support at the Rajya Sabha, where the BJP for the time being doesn’t have the majority. Ms. Jayalalithaa could also give two-third majority for Modi government in making fundamental changes at the centre.

Above all, Ms. Jayalalithaa could now boldly cite the mandate in mobilising the masses to convince the Centre, convince international forces and to disprove a bunch of media corporates and intelligence-operated ‘opinion makers’ who were long blighting the cause of Eezham Tamils in India as well as in the international arena.

Making use of the wave of change, a mass mobilisation transcending political parties should come forward in Tamil Nadu, to achieve something substantial in this regard without delay.