The military intelligence operatives of the occupying Sri Lanka Army deployed local goons to confront the elected Tamil representatives of the Tamil National Alliance and Tamil National Peoples Front from observing rituals at temples and churches in the North and East commemorating Mu’l’livaaykkaal Remembrance Day on Sunday. As a way of ridiculing, Sinhala soldiers entered into Nalloor Kanthasaami temple and ‘competed’ with Tamil representatives in making ‘ritual offerings’ at the temple. The Bishop of Jaffna was under pressure to stop lighting commemoration lamps at the churches. SL soldiers were deployed in front of temples and churches. However, Eezham Tamils in the North and East observed Mu’l’livaaykkaal Remembrance at their houses and businesses in an emotional manner, passing a strong message to the world. 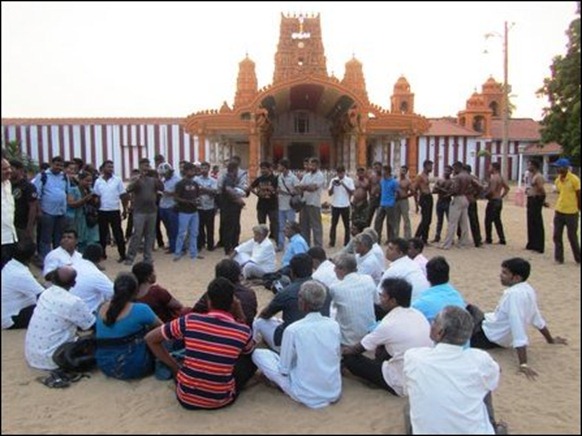 Tamil representatives sitting on the ground talking to media as SL military soldiers, without wearing military shirts, are watching them

The entire SL military apparatus in the North was deployed in blocking public events.

Earlier, the SL military was telling the people not to have any remembrance event at public places. The public was told to commemorate their dead at houses and temples.

But, on Sunday the people were told not to have any prayer at the temples or churches in remembrance of those who perished in the genocidal onslaught.

Tamil politicians, condemning the attitude of the occupying Sri Lankan forces, said that the conduct of the SL State and its armed forces on Mu’l’livaaykkaal Remembrance Day was only adding another evidence to the world in depicting the Sinhala exclusivist mind-set that doesn’t tolerate the self-respect of Eezham Tamils in the island. 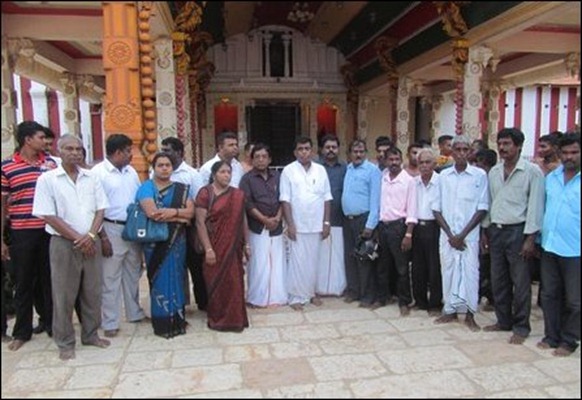 The Tamil politicians were present at Jaffna Cathedral, Kanthasaami Temple and Veera-maa-kaa’li temple in Nalloor after 6:00 p.m., conducting prayers, lighting of candles and conducting religious rituals paying respect to the dead.

A local squad operated by the SL military verbally abused the Tamil politicians, removing the coconuts from them, when Tamil politicians prepared to break coconuts into sherds at Veera-maa-kaa’li Amman temple in Nalloor.

Breaking coconut into sherds (Chitha’ru-theangkaay) in front of temples is a devotional religious ritual of Saivites in which emotions and will to remove obstacles are subconsciously expressed.

Political observers in the North say that the present Sinhala commander Major General Udaya Perera, occupying Jaffna, has earlier shown ‘expertise’ in oppressing operations when he was in charge of Ki’linochchi district after the Vanni war followed by getting ‘training’ in the USA.

When the Bishop of Jaffna came under pressure from the SL military, a section of the priests were rushed to Jaffna Cathedral to pass a message to avoid ‘controversies’, but the priests and Tamil representatives had already paid their tribute with lighting the candles, news sources told TamilNet.

SL soldiers deployed in front of worship places were instructed not to allow the tolling of bells in temples and churches.

The SL military intelligence operatives were busy in monitoring and following the journalists, civil activists and Tamil politicians.

A trader and Tamil politician Thuvaarakesvaran, who is the brother of an assassinated Tamil MP Thiyagarasa Maheswaran, had arranged for a special religious ritual for the families that had lost their kith and kin in the Vanni War. But, the SL military completely blocked the public from accessing Nakuleasavaram temple where the ritual was arranged.

NPC councillor Ananthi staged a sit in protest in front of a SL military barrier on the road to the temple.

The ITAK (TNA) office at Martin Road, TNPF office at 3rd Cross Street and the office of a newly formed party known as Tamil National Progressive Party were under continuous surveillance by the SL military. All the by-lanes in the vicinity of these offices were blocked and no one was allowed to enter the offices. All the Tamil representatives came together to observe Mu’l’livaaykkaal Remembrance Day.

However, Tamil parliamentarians Suresh Premachandran, Sivasakthi Ananthan, S. Sritharan proceeded with the observance with public participation at the political offices situated in Vavuniyaa, Ki’linochchi and in Neerveali. 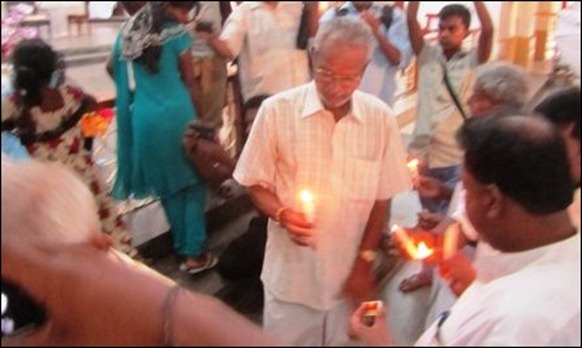 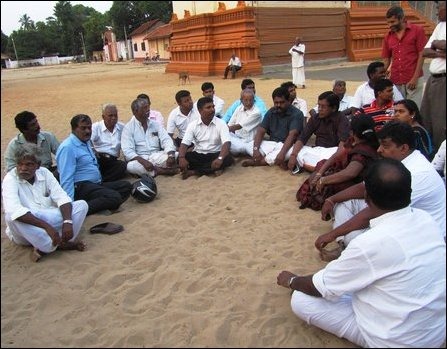