Protests have proliferated in Tamil Nadu state against what protesters have termed as “New Delhi’s unwavering courting of genocidal Sri Lanka”, at the very inception of the new BJP government. The decision to invite the Sri Lankan president Mahinda Rajapaksa to the swearing-in ceremony of the newly elected Indian Prime Minister is interpreted as New Delhi’s disrespect to the democratic mandate expressed in Tamil Nadu State Assembly resolutions. The Sri Lankan President is also the Commander-in-Chief of the SL military that has been accused of war crimes and crimes against humanity even by the world Establishments, which do not want to recognize the crime of genocide despite clearly documentable intent, evidence, scale and the level of sophistication of the physical and structural genocide committed against Eezham Tamils.

Shedding differences amongst them, the students of Tamil Nadu belonging to a variety of student formations united and staged a symbolical protest in front of the BJP office on the 24th of May vehemently condemning the invite to Rajapaksa.

The protest also earned Tamil Nadu students as the first in India to protest against the new government.

The following day several students belonging to the Balachandran Students Movement (BSM) staged another protest in front of Actor Rajinikanth’s house, condemning his anticipated presence at the swearing in ceremony at New Delhi.

The students threatened to wage a anti Rajinikanth campaign urging the people to boycott his movies if he were to disregard the sentiments of Tamils and attend the ceremony alongside genocidal Rajapaksa. Due to the scrutiny directed on him as a result of the student protests, Rajinikant was compelled to decline his invitation, nevertheless his daughter attended and tweeted that it was ‘a memorable moment’ and that she was ‘a proud Indian’ to have attended the ceremony.

The BSM organized a protest outside central government institution of Shashtri Bhavan in Nungkampaakkam amidst heavy police deployment on the 26th of May.

A placard held by one of the students summed up the attitude among the agitating sections of the Tamil Nadu activists: “Mr Modi, you choose Chennai or Colombo, You can’t have both”.

The students also shouted in Tamil “ We condemn the Modi government and the Indian state who invites genocidal Rajapaksa on Indian soil’. The student were quickly placed in police vehicles and driven off to detention as they continued to shout their slogans “Go back! Go Back! Rajapaksa Go Back, Genocidal Criminal Rajapaksa go back!”

After a few minutes, a group of 50 activists belonging to a Thanthai Periyar Dravida Kazhagam, marched forth in front of the Shastri Bhavan at Chennai waving their flags and cursing New Delhi government and Rajapaksa. They were arrested within 10 minutes by the Tamil Nadu Police and driven off to police custody.

The students in particular courted arrest on each of the protest. Some student activists also told TamilNet that they were vowing a vigorous campaign against New Delhi and urged the Tamil diaspora to show solidarity. They also added their disappointment regarding the severe lack of diaspora youth political engagement.

The polarization between New Delhi and Tamil Nadu will deepen in the future, the student activists have warned claiming that the people of Tamil Nadu have started to look at New Delhi’s open disregard on Tamil Nadu peoples’ sentiments as a characteristic of the Indian State itself. 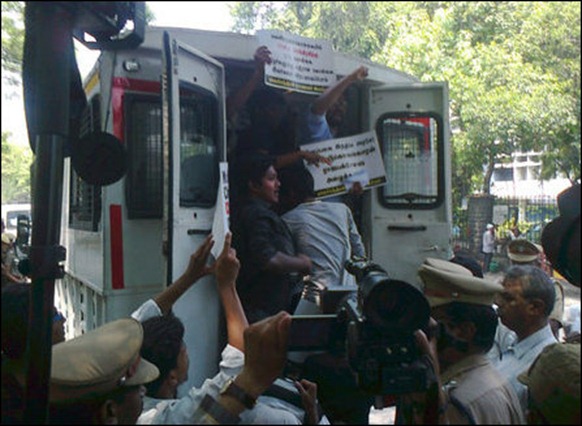