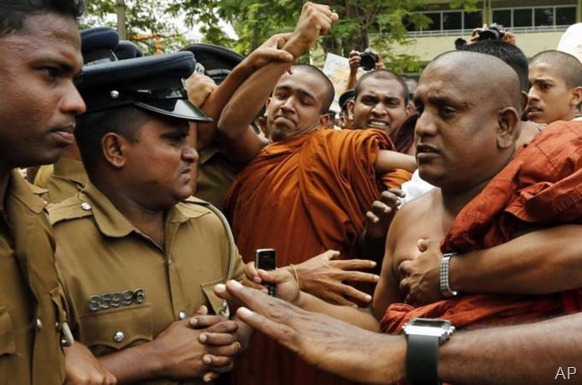 Colombo, Sri Lanka – Protesters led by Buddhist monks from the right-wing Ravana Balaya group have occupied the Ministry of Buddha Sasana and Religious Affairs in the Sri Lankan capital, Colombo.

The Sinhalese Buddhist nationalist group protested on Wednesday against the creation of a new religious police unit, which was created in April this year in the wake of rising number of religious conflicts in recent years.

The general secretary of the group, Iththakande Saddhatissa Thero, said that they were protesting against the formation of the unit as it undermined religion in the island nation located at the southern tip of India.

"Nowhere else in the world has there been a special police unit setup to investigate religions. This is a conspiracy led by the Western powers. As the complaints increase, organisations such as the United Nations will say that religious freedom does not exist in the country," he told Al Jazeera.

Saddhatissa said that he and his supporters were ready to occupy the ministry until the new police unit was dissolved.

"They will have to arrest us and drag us out of here. We will not leave until this unit is shut down."

The protesters had earlier this month demanded that the police unit be disbanded by the end of the Buddhist holiday, Vesak, which takes place on various dates across the world.

However, the secretary to the ministry, MKB Dissanayaka, said that neither the inspector general of police nor the ministry had the power to disband the police unit.

"I explained to the priests that we would submit their grievances with the president’s office and organise a meeting with relevant parties in the near future," he said.

Dissanayaka added that the police unit would continue to operate as normal unless the president instructs them to shut it down.

Police spokesperson Ajjith Rohana told Al Jazeera that more than a 1,000 complaints had been lodged with the religious police unit, of which nearly 60 of them are currently being investigated.

He added that this unit had been formed with the sole intention of maintaining religious harmony in the Budhist majority country, with Hindus and Muslims comprising a quarter of the total population. He dismissed speculation that it would undermine the religious integrity of the country.