In addition to doing agriculture, industries and tourism, genocidal Sri Lanka’s occupying Sinhala Army, groomed to set a new paradigm jointly by Washington, New Delhi, Beijing and the UN, has started conducting archaeology too in the country of Eezham Tamils. The military claims ‘exploring and discovering’ a Buddhist site at the locality of Uruththirapuram Siva temple in Ki’linochchi. Meanwhile, The Hindu last week relayed a one-sided history projected by Colombo’s High Commission in New Delhi, on the Buddhist connections of Lanka and Odisha (Orissa), to envisage new business enterprises. The relay also added on Sita temple in Nuwara Eliya, a fake promoted into a larger regional myth in recent times. 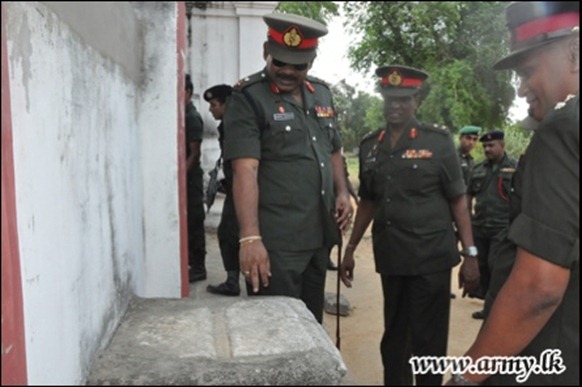 On finding Buddhist temple ruins at a current Siva temple locality in Ki’linochchi, genocidal Sri Lanka’s Army website on Wednesday said: “20 Sri Lanka Light Infantry (SLLI) troops of the 662 Brigade under the Security Force Headquarters – Kilinochchi (SFHQ-KLN) came across the site lying in their area of responsibility by accident […] Major General Sudantha Ranasinghe, Commander, SFHQ-KLN who himself inspected the place,” and all the hall marks confirm the existence of a Buddhist temple of the Polonnaruwa period.

The Uruthirapuram Sivan temple was built in the last century at a site where a Sivalinga of Pallava style and an Ampaa’l sculpture were found.

The Sinhala-Buddhist State of Sri Lanka, placed at Colombo to succeed the legacy of colonialism in the island, congenitally doesn’t have a culture to look at history as history, particularly with the nation of Eezham Tamils and their country in the island.

The Eezham Tamils don’t militarily go and demographically claim Anuradhapura, Polonnaruwa (a capitol built by the Cholas), Padaviya, Kurunegala, Kandy, Kotte (Colombo) or the Dondra Head (the southern most point in the island), citing the presence of Saiva sites there. Even their traditional pilgrimage to the Adams Peak and Kathirkaamam has become a humiliating experience in recent times.

What is genocidal about the ‘archaeology’ of the Sri Lankan State is the occupying Sinhala military, known for its engagement in the destruction and desecration of the Saiva temples, declaring Buddhist archaeological sites, carving out protected military enclaves, building new Buddhist temples there, bringing in Buddhist clergy, bringing in settlers and founding new Sinhala-Buddhist settlements and townships.

In 2010, writing in The Times, British journalist Jeremy Page encapsulated the whole process as “the army and the archaeology department.”

In that feature, Jeremy Page cited Sudharshan Seneviratne, who was at that time cultural advisor and head of Cultural Fund of Colombo government, for admiring Mahinda Rajapaksa as a “smart politician.”

The Washington-New Delhi Establishments that back the Sri Lankan State, particularly its military, as a ‘corner stone’ for their imperialistic manoeuvrings in the region, expect the Eezham Tamils to ‘reconcile’ with the naked genocide, accepting it as new social engineering for ‘multicultural unification’ of the island.

Genocide has many facets and one such is genocide of historicity.

Unless the historical reality of the two nations and their territories in the island are conceded, facilitating people to freely reflect on the legacies of the past without present constrains, viewing and presentation of history in the island is not going to be history. It will be only historical genocide of one nation against the other.

But the interest today is not on people reflecting on history, but creating a history in which people ‘reconcile’ with genocidal imperialism.

Last week The Hindu relayed a history, citing Colombo’s outgoing High Commissioner in New Delhi, Prasad Kariyavasam, speaking on the Buddhist relations between Lanka and the Odisha (Orissa) state of India that was called Kalinga in history.

The occasion was the formation of Kalinga-Lanka Foundation, which was launched by Kariyavasam and New Delhi’s former Foreign Secretary, Lalit Mansingh.

The aim was to encourage investment to exploit the human and mineral resources of the two regions. There was also mention of scholars, artists, tourists and pilgrims.

The real aim was isolating Tamil Nadu from the other Indian States on the national question in the island.

Colombo diplomat’s endeavour is on “developing unique ties with individual Indian States on the basis of their cultural linkages with the island nation.” The Hindu said.

“When South Asia and Asia rise, our two regions that once controlled the sea trade at the time may also rise,” The Hindu cited the Colombo diplomat.

The Hindu relayed the history narrated by the Colombo diplomat on Prince Vijaya, the founder of the Sinhala race, the tooth relic and several Sinhala kings coming from Kalinga.

According to the same Sinhala Buddhist historiography, the worst ever conquerors against Sinhala Buddhism, such as Kalinga Maaga, also had come from Kalinga.

According to history, Kalinga has also contributed to the formation of the Tamil-Saivaite Kingdom of Jaffna in the north of the island.

Will Kalinga-Lanka Foundation will help for that historical legacy too is the question of Eezham Tamils responding to The Hindu relayed history of the Colombo diplomat.

Writing on the outgoing diplomat, who will be taking up genocidal Sri Lanka’s UN ambassador post in New York, The Hindu said that he had also facilitated the establishment of a temple to Sita near Nuwara Eliya sponsored by the Madhya Pradesh government [run by the BJP].

The High Commission has taken keen interest in participating and providing inputs to the Sanchi University of Buddhist-Indic Studies in Madhya Pradesh, The Hindu further said.

The temple of Sita in Sita-Eliya in Nuwara Eliya is a historical fake, resulting from conflation of words and myth-formation by a migrant community.

While promoting genocidal Buddhism against Eezham Tamils on one hand the BJP need not build fake Ramayana history for ‘Hindus’ in the region, and The Hindu need not subtly paint a picture for corporate-imperialistic engineering bulldozing nations in the region, Tamil activists for alternative politics commented.

Tamils, in their long history of interaction with all the major religions of the world (which is unique compared to any linguistic identity in South Asia), rejected a spiritually and ideologically corrupt Buddhism at one point of time, in favour of socially liberating Saiva and Vaishnava devotional movement. From time to time, Tamils have also rebelled against Brahmanistic monopoly of religion. The latest expression could be seen in the driving spirit of the Dravidian movement and atheist movement in the last century. Such a civilisation could never ‘reconcile’ with genocidal-military Buddhism that is now trying to cling on to neo-imperialist aspirations in the region, including that of ‘Hindutva’.