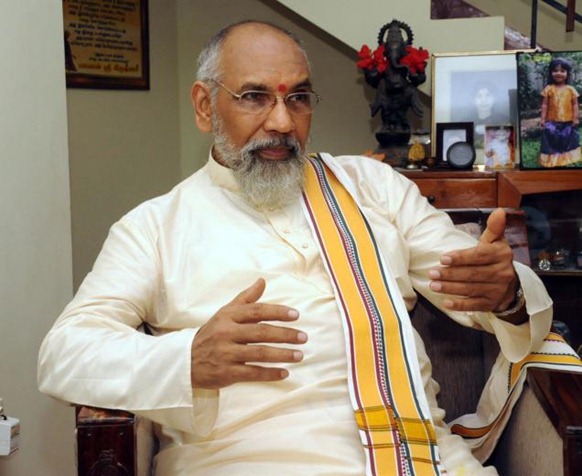 The newly formed Prime Minister Narendra Modi-led government and Tamil Nadu will not be at variance in regard to the political needs of Sri Lankan Tamils, Northern Province Chief Minister C.V. Wigneswaran has said.

Observing that Tamil Nadu was intertwined in the political complexity in India, he said: “Mr. Modi seems to have identified the priorities as far as our immediate needs are concerned. He seems to have impressed the same upon our leaders. It is for our Government to take the cue and act fast.”

The Chief Minister spoke to The Hindu recently, days after Mr. Modi’s meeting with President Mahinda Rajapaksa in New Delhi, where he pushed him for the early and full implementation of the 13th Amendment and even go beyond that.

The emphasis on what is often referred to as “Thirteen plus,” promised by President Rajapaksa during diplomatic negotiations with the former Prime Minister Manmohan Singh and United Nations Secretary General Ban Ki-moon in 2010, has significance for the functioning of the Northern Provincial Council (NPC). The 13th Amendment, which followed the Indo-Sri Lanka accord of 1987, mandated the creation of provincial council with certain powers devolved to the provinces.

Observing that his hands were tied, the Chief Minister pointed to heavy militarisation of the Northern Province as a major obstacle to administration. “We knew the inadequacy of the 13th Amendment and did expect some interference, though the scale of interference from the military, despite being in the spotlight of the world is worrisome for what it portends, not only for the North East but for the rest of the country.”

The Tamil National Alliance (TNA), an amalgam of Tamil political parties that fielded Mr. Wigneswaran, a former Supreme Court judge, as chief ministerial candidate in the September elections hoped he would be in a position to take on Colombo boldly. However, with a former army commander serving as Governor of the province, and a chief secretary whose loyalties are reportedly with him, the Chief Minister said he was “frustrated and disappointed” but has not lost hope.

The imposing building housing the Northern Provincial Council secretariat in Kaithady near Jaffna town could easily be mistaken for an important power centre. C.V.K. Sivagnanam, the Council’s 74 year-old chairman, was seated at his office, dwarfed by his huge table. “We have hardly any power,” he said, pointing to inadequate finances and human resources as major problems.

According to him, the LKR 1,876 million allocated for the year, for the five districts in the province, is grossly inadequate. “The province did not have an elected council for 25 years. The financial commission cannot apply the same yardstick it uses for other provinces,” Mr. Sivagnanam said, adding that the five war-torn districts of the province needed at least LKR 1,000 million each.

Reiterating the Chief Minister’s concern over the Governor — who reports to the President directly —retaining most of the powers, he said: “The Governor is the chief executive here. Our staff therefore think they are more answerable to the governor. Their loyalty, sincerity and obedience lie there,” he said, pointing to a lack of support or coordination from most of the Council staff.

Given the limitations, has the TNA done its best? Leader of Opposition of the Council S. Thavarajah of the Eelam People’s Democratic Party (EPDP), currently part of President Rajapaksa’s ruling coalition, thinks they have not. Accusing some TNA members of indulging in pointless rhetoric, he said 90 per cent of the over 120 resolutions passed so far were totally irrelevant to the administration of the provincial council.