Phil Miller, a researcher for Corporate Watch in London, who gave expert evidence on ‘British State complicity in genocide of the Tamil people’ at the Permanent Peoples’ Tribunal on Sri Lanka (Bremen Session), has brought out an updated report titled “Britain’s Dirty War against the Tamil people – 1979–2009” published by the International Human Rights Association Bremen. “This report draws on original research conducted at the UK National Archives and from Freedom of Information requests, as well as pooling together disparate information that is available in the public domain,” Phill Miller says in the preface. Dr N. Malathy, a key member of NESoHR and author of ‘A Fleeting Moment in my Country’, who survived the genocidal onslaught on Vanni, introduces the report by Philip Miller to TamilNet readers.

Full text of the review by Dr. N. Malathy from New Zealand follows:

Britain’s role in the genocide of Eelam Tamils

There is a cost in bringing out the truths that are not already in the public domain. When the truth is against the interest of the powerful, such as the British government, it is difficult to find the resources needed to expose that truth. It is invariably those with an acute awareness of the need to bring out that truth who put in their own resources to do so. The report, “Britain’s Dirty War against the Tamil people” is such an effort by Phil Miller. It is published by the International Human Rights Association Bremen. 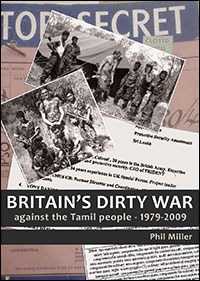 The report focuses on Britain’s role in the genocide of Eelam Tamils during the post-colonial period. Phil Miller has put together information collected from disparate sources such as declassified British documents, those obtained under the Freedom of Information Act, as well as what is available in the public domain such as books, reports, news reports etc. Each category of information requires efforts, to obtain as well as process them into usable facts. Even what is available in the public domain requires gathering and piecing together so that they establish a fact. Phil Miller has created a very readable set of evidence that is presented chronologically. That is not an easy task.

The extensive evidence presented in the report range from: covert operations during 1984-87 using ex-British military officers, overt training of Sri Lankan military and police from 1983 to this very day, extensive sale of arms to Sri Lanka during ceasefire, urging EU to proscribe LTTE during ceasefire and blocking UN Security Council action against Sri Lanka in 2009.

The evidence is presented in the report in three phases. The first from 1979-1989 titled “Tackling the Tamil problem” documents in addition to the extensive covert operations using ex-British military personnel as mercenaries, the training of Sri Lankan military and police officers and even advising the Indian forces that landed in the Tamil homeland in 1987. It names many of the British officials who were involved. During the next phase from 1990-2002, Britain’s role in training Sri Lankan military officers expands. The Sri Lankan Army Command and Staff College was setup during this phase with heavy involvement of British military officials some of whom were permanently stationed in Sri Lanka to work in this college. The last phase covers the period from 2002 to 2009 when, Britain was instrumental in getting the LTTE proscribed by the EU and it sold extensive list arms to Sri Lanka while the ceasefire was still in effect.

In the chapter on the second phase, the report also unearths the involvement of Britain in urging the Sri Lankan government to avoid a ceasefire with the LTTE following the 2001 devastating LTTE attack on the Bandaranaike airport. It documents the expert team of fifteen top retired British military officials sent to Sri Lanka after this attack to protect important hubs thus avoiding a ceasefire by the embattled Sri Lankan government.

The report contrasts the long list of British arms sales to Sri Lanka during the ceasefire period of 2003 to 2006 to that of the goods sent by a British Tamil activist Shanthan over the same period. The list of items sent by Shanthan included mostly computers, no military equipment was sent by him. Yet, he was sentenced for this in Britain in 2009.

This report is an expanded version of the evidence Phil Miller gave at the Permanent People’s Tribunal on Sri Lanka held in Bremen in December 2013. His evidence together with the evidence presented by Viraj Mendis on Britain’s role during colonial period nailed the verdict of Britain’s complicity in the genocide of Tamil people. The evidence given by Viraj Mendis will also be published on July 15 on the PPT Sri Lanka website (www.ptsrilanka.org).

When the Permanent People’s Tribunal on Sri Lanka passed the verdict of Britain’s complicity in the genocide of Tamils, there was a surprising reaction from some Tamil quarters. Some Tamils rejected the verdict and others wished that it was supressed. The situation is best understood by looking at a parallel more easily understood event. When a high caste group in India murdered a low caste young man who dared to rebel against some caste injustices there were many low caste people who refused to give evidence against the high caste group. If one examines the various reasons for this refusal, the Tamil rejection of Britian’s complicity will also start to make sense.

Exposure of the complicity of the powerful states in the Eelam Tamil genocide rather than its suppression ought to be the moral force that should be used to force these states to remedy the carnage they had caused and continue to cause. Phil Miller’s work is an important contribution towards this.