A large number of terracotta images and other artefacts in sherds were found at an agricultural land in Chinna-Poovarasang-ku’lam in the Mullaiththeevu district of the country of Eezham Tamils this week. The villagers handed over the artefacts found in the private land to occupying Sri Lanka’s ‘Government Agent’ in Vavuniyaa, who in turn deposited them at the local museum in Vavuniyaa. However, occupying Sri Lanka’s military intelligence was after everyone involved in the discovery as well as the site, sources in the district told TamilNet. Meanwhile, some Tamil inscriptions have recently been found at Padaviya in the Anuradhapura district, but their contents and the present whereabouts of the stone slabs are now unknown, academic sources said. 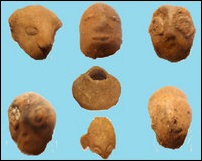 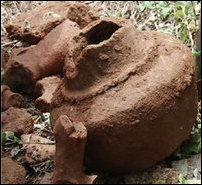 The terracotta finds at Chinna-Poovarasang-Ku’lam included broken pieces of male and female figurines, pieces of large animal figures and pottery. They were found in concentration at one spot, almost at the surface level.

They remind of the folk religious complexes for deities such as Aiyanaar found in Tamil Nadu, where a large number of terracotta animal figures and human figures are kept in concentration for votive purposes, commented an academic.

Unless found in stratigraphic context, or found with other dateable artefacts, or put to radiometric assay, it is difficult to date such pieces of folk art merely through typology, as they continued retaining certain characteristics from very early times to recent times, the academic further commented. He however added that a few pieces of pottery found among the collection could go back to circa 13th century CE.

Similar sites of terracotta art have also been found earlier at Saasthiri-koozhaang-ku’lam, Uruththira-puram, Pallavaraayan-kaddu, Thiyaakam and Ma’n’niththalai in the Vanni districts, said Prof P. Pushparatnam, Head of History Department of the University of Jaffna, who visited the Vavuniyaa museum with students of the department to study the artefacts.

The Batticaloa region has many such sites, and in the early 1970s, a Tamil Divisional Revenue Officer (now called Asst. Government Agent) made an impressive collection of the terracotta art pieces and presented them to Jaffna Archaeological Society. They in turn, went to Jaffna University when the university was started in 1974, but were lost during the IPKF occupation of the university in the late 1980s.

The available image shows that the inscription is datable on palaeographical grounds to late 12th century or early 13th century. 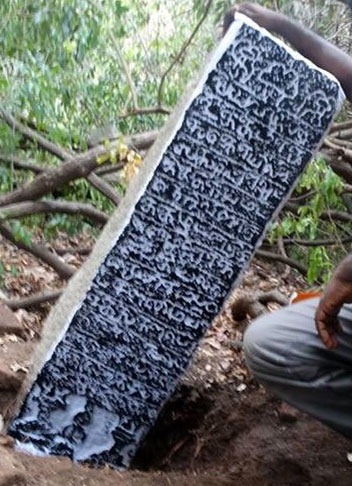 Padaviya (Pathi-vaavi), known by the names, Sree-Pathi-graama, Aipo’lil-veera-padda’nam and Vikrama-kadikaith-thaava’lam in the Tamil inscriptions found at that place earlier, has an archaeological complex of Saiva temples.

Found ruined and largely abandoned, a new colonisation programme started at Padaviya in the 1940s completely Sinhalicised the region. The few remaining Tamil settlements were uprooted in the 1958 pogrom. Padaviya is today the hub for the expansion of Sinhalicisation towards the Mullaiththeevu coast, creating a Sinhala division in the Mullaiththeevu district itself and delinking the Tamil territories in the North and East.