The family of a 11-year-old child, who was repeatedly raped by Sinhala soldiers of the occupying Sri Lanka Navy in the islet of Kaarai-nakar off Jaffna, has come under severe threat not to identify the soldiers, sources in Kaarai-nakar told TamilNet Friday. On Wednesday, the villagers of Oori, near the main naval base of the Sri Lanka Navy, captured a soldier after being identified by the child. The angered Tamil villagers demanded immediate arrest of the rapist Sinhala solider and handed him over to the SL Police at Oorkaavaththu’rai (Kayts). In the meantime, US-trained commander of the genocidal Sri Lankan military in North has instructed his officers to suppress the identification of the culprit by the child. 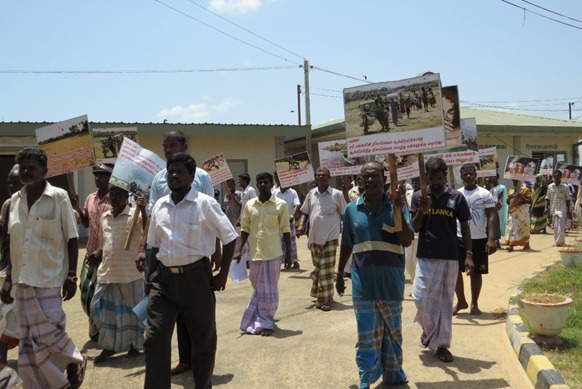 On Friday, seven SL Navy sailors were taken for identification at a parade in Jaffna, but all the soldiers were released as the child victim was not able to find the culprits among the seven who were at the parade.

The villagers were not allowed to verify that the captured soldier was among those seven paraded at the court in Jaffna, news sources in the city said.

Oori is a thinly populated village situated near the largest SLN base at Kaarai-nakar, which is a strategically important islet guarding the channels entering into the Jaffna lagoon from the Palk Strait. The SL Navy has occupied the islet.

The 11-year-old girl together with a 07-year-old girl child that accompanied her to school were regularly taken away by a Sinhala soldier when the children were on their way to school in the mornings.

The children were kept among the bushes, abused and released around the school closing time. The girls were threatened by the SL soldiers not to reveal the abuse to their parents.

When the parents discovered the bleeding 11-year-old child in a mentally disturbed condition on Wednesday, they went to the crime site together with the child and the fellow villagers and they caught the Sinhala soldier as he approached the child. The angry villagers attacked the culprit and handed him over to Oorkaavaththu’rai police demanding immediate legal action.

In the meantime, the US-trained commander of the SL military in North, Major General Udaya Perera, was attempting to conceal the matter. The SL military officers who went to the house of the victim exerted pressure on them not to give publicity to the brutal episode. The Sinhala military was intimidating the family to relocate to another place outside the islet to avoid protests.

When NPC Councillor Ananthi Sasitharan was trying to get in touch with the family on Thursday, the family was warned not to speak to her.

On Friday, Tamil National Alliance (TNA) and Tamil National Peoples Front (TNPF) politicians together with the villagers and the rural organisations in Kaarai-nakar organised a protest.

The naval officers of the genocidal Sinhala military were also attempting to harass the family on Friday while the TNA and TNPF politicians were with the family.

TNA parliamentarian Suresh Premachandran who was at the crime site told media that he personally witnessed the attempt by the SL military to harass the family. Mavai Senathirajah, E. Saravanabavan, S. Sritharan, several NPC councillors, and TNPF General Secretary Selvarajah Kajendren led the protests enabling the villagers to articulate against the occupation of the genocidal military.

The protesters were demanding immediate legal action and withdrawal of the SL military from Kaarai-nakar.

Politicians who visited the family said there were widespread allegations that the girl had been subjected to rape by several soldiers. According to the villagers, the other girl had also been abused by the SL military, they said. 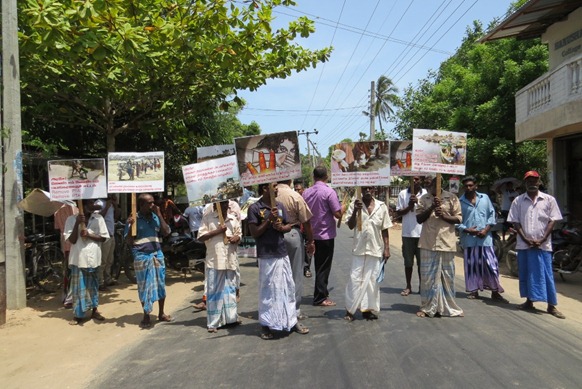