The STF, trained by the British, which is a full-fledged military outfit under the SL Police and was directly engaged in acts of genocide in the East as well as in Vanni during the war, has started arbitrary arrests in Jaffna peninsula during the night time. Tamil youths are being detained for being spotted on the streets without identity papers in their own villages and towns. The civilian freedom of movement has been severely restricted and the people are again afraid to move around after 8:00 p.m. A so-called ‘Zonal Commander’ of the STF has been appointed for Jaffna peninsula, receiving direct instructions from the SL Military Establishment, informed sources said. 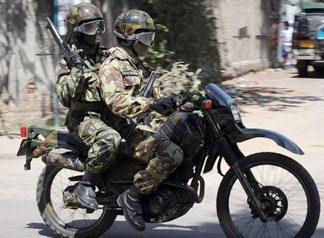 Four youths ‘arrested’ by the STF a few days ago in Achchuveali have been detained for several days under ‘Emergency Regulations’. Last Sunday, two Tamil youths were detained at Kalviyang-kaadu, a suburb of Jaffna city, around 11:00 p.m. for standing along the road without identity documents.

The Sri Lankan Deputy Inspector General (DIG) for police in Jaffna doesn’t seem to be the commander of the STF, the sources further told TamilNet. The STF was directly involved in several massacres in the East, including the well-known ‘Trinco Five’ massacre of 2006.

The STF, which is an extended arm of the SL military, organised as a full-fledged military organized under the SL Police Department, has been directly involved in the genocidal crimes in the East for a long time.

After the genocidal onslaught in May 2009, Colombo has been stepping up the deployment of the notorious STF commandos in all the districts in the Northern and Eastern provinces.

600 commandos of the STF, with special training, have been now deployed in Jaffna peninsula alone, an informed sources told TamilNet.

There are more than 8,000 STF personnel attached to 69 camps, most of them situated in the occupied country of Eezham Tamils in the North and East of the island.

Corporate Watch, a non-profit research group in UK, has in recent times exposed the training provided to more than 3,500 Sri Lankan ‘policemen’ including the STF commandos including senior commanders. The British assistance was being provided while the STF was directly engaged in acts of genocide in the East as well as in Vanni.

In a classified memo written by US’s Sri Lanka Ambassador Robert Blake in October 2006 to Washington, ten months after the massacre of five students in Trincomalee, SL presidential sibling Basil Rajapakse had admitted that Special Task Force (STF) was responsible for the killings, according to a WikiLeaks document.