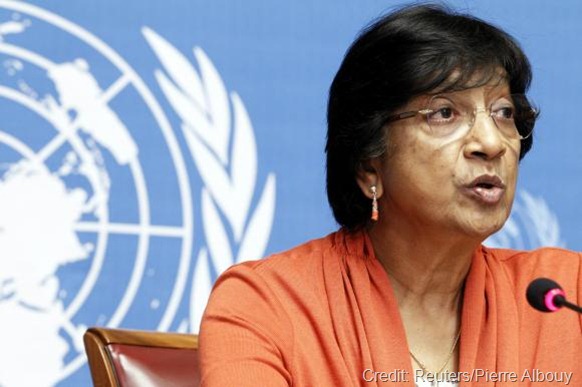 The United Nations can conduct an effective investigation into reports of war crimes in Sri Lanka without visiting the country, said U.N. Human Rights Chief Navi Pillay, reacting to a government decision to deny investigators entry.

Sri Lankan government forces have been accused of widespread human rights violations in the final stages of a 26-year civil war against ethnic Tamil separatists which ended in May 2009.

The United Nations estimated in a 2011 report that about 40,000 Tamil civilians were killed in the final weeks of the war, mostly by the army. Sri Lanka has rejected the allegation.

In March, the U.N. Human Rights Council (UNHRC) voted to investigate reports of abuses during the war, during which 100,000 people were killed, saying the Sri Lankan government had failed to investigate properly.

The vote angered the government, which says it will not cooperate or grant visas to U.N. investigators.

"There is a wealth of information outside of Sri Lanka which can be tapped into," Pillay told the Thomson Reuters Foundation in an email response to questions.

"The credibility of the report will depend on it reflecting proper standards of corroboration of evidence, whether the team is allowed into the country or not."

Pillay cited Syria and North Korea as examples where, despite no access, investigations were carried out.

"Hardly anyone, apart from the Syrian and Democratic People’s Republic of Korea governments, are questioning the credibility of these two inquiries, so I don’t see why it should be any different in the case of Sri Lanka," she said.

The Sri Lanka investigation, which began on July 1, has increased tension between the government and the United Nations. Some non-government groups have accused authorities of trying to discourage war survivors from giving evidence.

President Mahinda Rajapaksa’s government says an external investigation is unnecessary and Sri Lanka can conduct its own. Last month, Rajapaksa appointed three foreign experts to a commission investigating disappearances during the war.

Pillay – a South African of Tamil descent who has been accused of bias in favor of Tamils by the Sri Lankan media and government – said false information was being spread to discredit the inquiry.

"Regrettably, there has been some serious misinformation and distortion," she said.

Media reports that investigators were denied visas by India and Thailand were false, said Pillay, adding that no one had applied for a visa for Sri Lanka or any other country.

The investigation’s coordinator and members of the advisory board had been "subjected to personal attacks in some Sri Lankan media that were both distorted and inaccurate", she said.

The 12-member team is based in Geneva but will travel to other countries when necessary. They will collect information, including testimonies, and verify allegations of atrocities. The findings will be presented to the UNHRC in March.

Pillay said the investigation was essential to establishing who was responsible for violations and to hold them to account.

"It is important to understand that this investigation was set up for the benefit of all Sri Lankans, as an avenue to achieve lasting peace and reconciliation," she said.