In a presentation at the Annual Convention of the American Psychological Association (APA) on 8 August, independent journalist and human rights activist Nirmanusan Balasundaram, talking about “visible and latent factors” of decades of oppression of the Eezham Tamil nation by the Sri Lankan state, explained how collective trauma inflicted on the Tamil nation is a part of structural genocide. Further talking about how militarization, demographic changes in the Tamil homeland, and abuse of Tamil women by occupying Sri Lankan forces were part of that process, he argued that “it is vital for major stakeholders of conflict to identify and address causes of psychological and collective trauma of the Tamil people.” 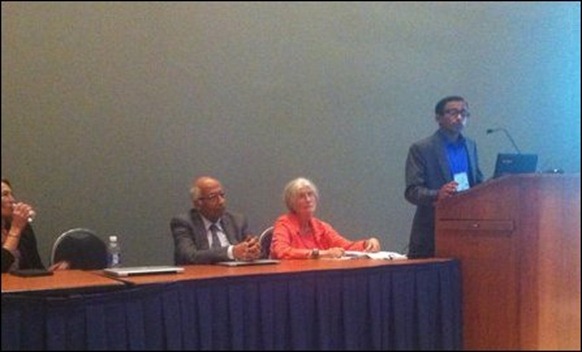 The APA is a prestigious institute which is the largest association of psychologists in the world, based in Washington DC, USA.

Their Annual Convention this year was held from 7-10 August at the Walter E. Washington convention centre.

Mr. Balasundaram presented under the theme of “Absence of Violence Is Negative Peace – Psychology Setting the Trend Toward Positive Peace-Justice” in a panel on 8 August.

The exiled Eezham Tamil journalist gave the audience a brief introduction to the Tamil nation’s struggle for “freedom, identity, survival and wellbeing”.

Talking about the history of the Tamils’ struggle, both through non-violent and armed means, and the progressively intensifying brutal manner in which the Sri Lankan state responded to it, noting how food, medicine and rape were used as weapons of war, he highlighted the results of these measures on the Tamil nation.

Talking about “visible and latent factors” of violence inflicted on the Tamil nation including physical and psychological pain, moral and material destruction, dehumanization, assault on the dignity of the Tamil community, the destruction of positive psychology, and breaking of morale, he said that among the Tamil survivors, “imbalanced psychology was a result of collective trauma”

Mr. Balasundaram spoke about how militarization, demographic changes in the Tamil homeland, and abuse of Tamil women by occupying Sri Lankan forces were part of a process of structural genocide.

He also talked about how it was inadequate to talk about a genuine reconciliation within the current system which prevented even the basic rights of the Tamil nation to collectively remember and mourn for their dead.

“Hence, it is vital for major stakeholders of conflict to identify and address causes of psychological and collective trauma of the Tamil people,” he said at his presentation at the convention.

Speaking to TamilNet about his presentation, Mr. Balasundaram said “The intention and effects of all of these factors covered is genocide of the Tamil nation. Concerned international actors should pay attention to address the root causes of the conflict, and when it comes to the question of justice, they must recognize and politically address the genocide if at all there is to be genuine reconciliation in the island.”

Diaspora observers said that it was also important for academics and activists to address in international venues the complicity of USA and India in the genocide of the Eezham Tamil nation and to highlight the responsibility that these powers have in providing reparation to the Tamils by means of a just political solution.

As has been evident from the manner in which the Sri Lanka state has behaved with the Tamils in the occupied Tamil homeland, ‘Sri Lankan reconciliation’ is only a cover for genocide. It is precisely this model that the Establishments of Washington and New Delhi have been promoting so far.

The Indian High Commission in Sri Lanka has published a brochure titled “India and Sri Lanka: A Partnership that Transcends Time”, which boasts about Indian contribution to “rehabilitation” in the “post-conflict period”. India under Modi is appearing no different than the previous regime in going overboard to appease Sri Lanka.

Likewise, the US, and its human rights branches, count the trees about individual rights violations or minority rights, and obfuscate the questions of genocide and remedial sovereignty to the Eezham Tamil nation.

More than the Tamils themselves, these two powers know the greatest details about the genocide perpetrated and are also well aware of its repercussions in the occupied Tamil homeland.