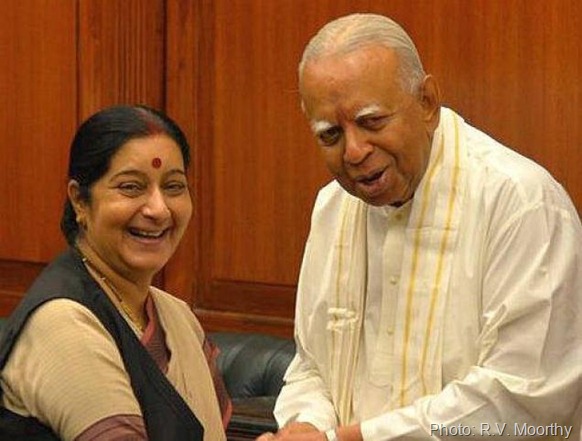 The delegation comprising 6 TNA MPs held discussion on various issues and complained about the alleged attempts by the Sri Lankan govt. to change the democratic composition of the Northern Province

A delegation of Tamil National Alliance (TNA), which rules Jaffna Province of Sri Lanka, on Friday called on External Affairs Minister Sushma Swaraj and said India can play a major role in resolving the ethnic Tamil problem in the island nation.

“They (people who live in Sri Lanka) have their roots in India. Their culture is Indian and everything is Indian.

So, I think India is one country that can play a major role,” he said.

The delegation comprising six TNA MPs held discussion on various issues and complained about the alleged attempts by the Sri Lankan Government to change the democratic composition of the Northern Province.

“We have explained the position currently prevalent on the ground in the north and the east… The difficulties people are facing, the aggressive programme implemented by the Sri Lankan Government to change the democratic composition of the northern and eastern provinces and the cultural and linguistics identity of the areas,” he said.

Accusing the Sri Lankan Government of being not interested in any political solution, Mr. Sampanthan said steps have “not been taken to implement the 13th amendment for devolving powers to the Tamil minority“.

“We have also talked about various other matters that are of concern of Tamil people and requested that some action can be taken by India. India should be pro-active in dealing with these questions,” he stressed.