While there is a general climate of silence in the Western establishments to recognize the oppression of the Eezham Tamil nation by the unitary Sri Lankan state as genocide, Australian writer and veteran journalist Trevor Grant is perspicuously unsparing in criticizing these establishments for their silence and complicity in the genocide. In his recently released book “Sri Lanka’s Secrets: How The Rajapaksa Regime Gets Away With Murder”, Mr. Grant besides documenting the various forms in which genocide is being perpetrated by the Sri Lankan state on the Tamils, also blasts the world establishments for their hand in this crime. Speaking to TamilNet, Mr. Grant said “This book condemns not only this latest potent strain of Sinhalese chauvinism in power in Colombo but also those in the halls of power in Canberra, Westminster, Washington and Delhi who give the green light to the genocide.” 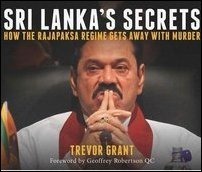 Grant said that the motivation to write this book came out of life stories that he kept hearing from Tamil asylum-seekers in Australia.

“I work closely with these people as a convenor with the Tamil Refugee Council, helping torture victims, presenting the Tamil Manifest show on Melbourne radio 3CR and driving a van to deliver clothing, food and furniture to those struggling to exist under Australia’s heartless refugee policy. In my travels I heard horrendous tales about the precarious existence for Tamils in their traditional homeland, before, during and after the war,” he said.

“I have been a journalist in the mainstream Australian media for 45 years. I know how to decipher fact from fiction. It was soon obvious to me that there was nothing false about these stories. They were real, alright, and, soon enough, I also discovered the extent of the evil complicity that had allowed a brutal regime to slaughter tens of thousands of innocent people and then carry on with its’ genocidal plan, without so much as a UN Security Council censure.”

“It made be ashamed of my country, knowing that after wiping out the bulk of its’ indigenous population, it is complicit in another genocide,” he added.

While carious human rights groups in the west are content with only counting the trees with respect to the island, Grant minces no words in calling a spade a spade.

‘Sri Lanka’s Secrets’, which is illustrated with graphic photos of the war and its aftermath, has poignant eye-witness accounts of survivors who experienced the war, torture and rape first-hand.

However, the book is not a tale of suffering devoid of political content because the author contextualizes the local and international scenario in which these atrocities happened.

Grant recognizes that the brutalities meted out to the Tamils are not just about the Rajapaksa regime but that the current president is “simply the most successful at it, in a long line of Sinhalese rulers whose desire to contain and destroy the Tamil identity and culture has known no bounds.”

The author notes how foreign powers tilted the balance in favour of the Sri Lankan government. He also exposes in detail the level of complicity that Australia has in legitimizing Sri Lanka, elaborating on Australia’s cruel treatment of Tamil asylum seekers.

He explains that “the Australian Government has been party to giving a nod and a wink to the Sri Lankan government to continue its persecution of Tamils and, thus, has contributed to the flight of asylum seekers they are trying to stop.”

The author also criticizes the inaction of the UN during the war and after for being responsible for the genocidal atrocities committed on the Tamils, condemning it for “callous indifference and abject incompetence.”

Despite elaborate accounts of the horrific crimes endured by Tamil survivors, Grant’s book is not defeatist as its conclusion shows.

“There is always one thing that despots forget as they go about their business of murder and terror. You can kill thousands of people, but you can never kill the human spirit.”