Hundreds of commandos from the occupying Special Task Force (STF), a full-fledged military outfit under the SL Police that has committed genocidal massacres against Eezham Tamils in the East, have been deployed in Vadamaraadchi East in Jaffna to muzzle renewed protests from Tamil villagers against the environment-destroying sand-scooping that is being carried out by Colombo-backed EPDP paramilitary’s Maheswary Foundation and Gotabhaya-operated ‘Neythal’ outfit. On Thursday, a 25-year-old pregnant woman was killed on the spot when a speeding vehicle belonging to Maheswary Foundation hit her on Saraswathy Lane at Navakkiri in Valikaamam East. 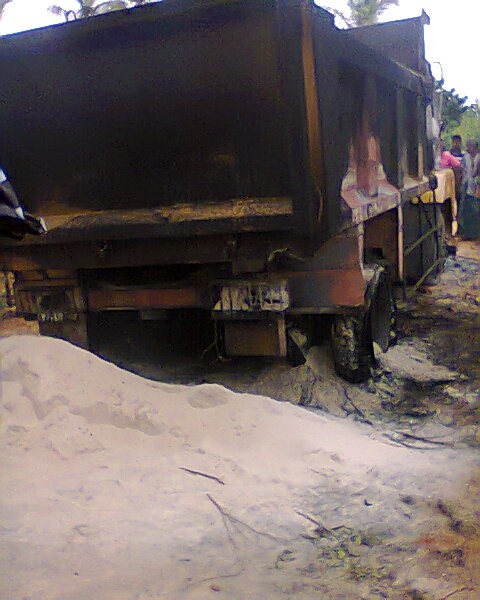 Vehicle involved in sand scooping burnt down by Puththoor villagers after the speeding vehicle hit a 25-year-old pregnant woman killing her on the spot on Thursday.

The angered villagers who witnessed the brutal incident chased the vehicle and burnt it completely down. The incident took place around 10:45 a.m. on Thursday

SL Police officials, who arrived at the site with SL military backing, were harassing the villagers. A senior police superintendent, who arrived at Navakkiri Thursday evening wanted to jail the relatives of the slain victims. However, no one has been arrested, according to the police on Friday.

At a press conference held in Jaffna on Friday, the SL police was not able to respond to questions whether the said vehicle was on its third trip after scooping sand. The vehicle only had a one-trip pass, according to an informed reporter. The police said they had no records as everything had been burnt down.

A young environmental activist, Ketheeswaran Thevarajah, who was instrumental in organisng protests against the sand scooping at Kudaththanai village was killed on 31 December 2010 by a killer squad for compiling information on environmental damage. The assassination was carried out after Mr Douglas Devananda had threatened Kudaththanai villagers not to protest against sand scooping by Maheswary Foundation.

Having obtained ‘legal permits’ from the genocidal State of Sri Lanka, the paramilitary outfit has been making large sums of money by illegal scooping many times above the allowed limits.

Realizing the economic potential behind the exploitation amidst the escalating demand for building material, the Sri Lankan Presidential sibling and Defence Secretary Gotabhaya Rajapaksa also entered the business through a murky outfit named as ‘Neythal’. SL military personnel are deployed as workers by Neythal, people from Maalu Junction at Karaveddi on Jaffna – Point Pedro Road, say.

It is under these circumstances, the genocidal State of Sri Lanka has deployed the notorious commandos of the Brtish trained STF in Vadamaraadchi East.

The indiscriminate excavation of sand has caused seepage of sea water into the villages in Vadamaraadchi East.

The stretch of sand dunes in Vadamaraadchi, that links the Jaffna peninsula with the Vanni mainland, is a unique geographical feature. The sands are actually carried by long shore drift from the Indian subcontinent to Jaffna and are deposited by the Northeast winds.

Tamil civil groups and Tamil National Alliance (TNA) politicians have exhausted all legal avenues available under the SL State system in their effort to put an end to the environmental genocide.

After the genocidal onslaught in May 2009, Colombo has been stepping up the deployment of the notorious STF commandos in all the districts in the Northern and Eastern provinces.

There are more than 8,000 STF personnel attached to 69 camps, most of them situated in the occupied country of Eezham Tamils in the North and East of the island.

Corporate Watch, a non-profit research group in UK, has in recent times exposed the training provided to more than 3,500 Sri Lankan ‘policemen’ including the STF commandos and senior commanders. The British assistance to STF was being provided while the outfit was directly engaged in acts of genocide in the East as well as in Vanni.