The Provincial Land Commissioner (PLC) of Eastern Province, Sirimewan Dharmasena, a Sinhalese, has been threatening the Tamil farmers of the ancient Tamil village of Thennai-maravadi in Kuchchcave’li division of Trincomalee district to share their lands with Sinhalese colonisers or face security threats at the hands of the Sinhala ‘home guards’ paramilitary. The threat comes after a series of meetings with the PLC on 12th, 24th and 30th of September 2014, the Tamil farmers from Kuchchave’li said. Thennai-maravadi is situated on the border of Trincomalee district and Mullaith-theevu district.

Until the ‘disputes’ were resolved, the resettled Tamils would not be allowed to engage in farming, the PLC has told the villagers.

Colombo has schemed a sinister move to demographically annex the strategic ancient Tamil village in Kuchchave’li division on the border of Northern and Eastern Provinces with the Sinhala dominated Padavi Sripura division of Trincomalee district.

Only 150 of 250 uprooted Tamil families managed to resettle in their native village of Thennai-maravadi after the end of war. They were given temporary huts for 6 months. Four years have elapsed and the families are still living in the same temporary huts without proper humanitarian assistance. The Sinhala farmers are receiving SL State support on a regular basis. 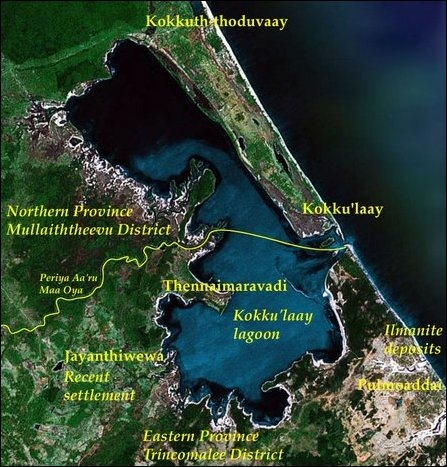 The Eezham Tamil farmers in Thennai-maravadi are in possession of land permits since 1952. The Tamil farmers have been continuously paying the necessary taxes to ensure their continued ownership of 525 acres of farmlands.

A total of 250 Tamil families were forced to displace from Thennai-maravadi in 1984. The Sinhala settlers from 12th and 13th Colonies, with the backing of the occupying Sri Lankan military and the Sinhala officials of the Colombo government have been encroaching the farmlands of Eezham Tamils. However, whenever the Tamils were forced to displace, the same Sinhala farmers systematically encroached into their lands, the Tamil farmers say.