When the majority of TNA members in the Northern Provincial Council (NPC) wanted the council to tell the world on the planned genocide and on-going genocide conducted by ‘Sri Lanka’ in the homeland of Eezham Tamils, a section planted in the TNA leadership to look after the interests of imperialisms, try to detract the whole genocidal dimensions of the plight of the nation of Eezham Tamils, said informed circles citing a 11-point explanation internally circulated by the so-called TNA leadership. The planted leadership claimed that it had consulted ‘legal experts’ and the NPC demanding genocide investigation or talking of genocide is not only inappropriate but also would affect the ‘credibility’ and independent function of the current international investigations.

The ‘internal circular’ however accepted that genocide defined by international conventions being committed by the island’s regimes against Tamils is a fact beyond debate. 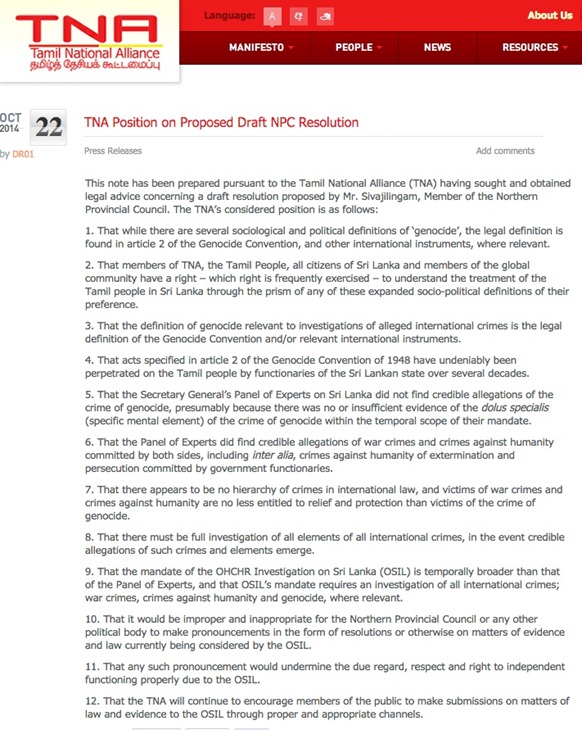 The letter by the planted group of TNA to NPC Councillors

But the planted leadership cited the absence of the mention of genocide in the UNSG report, and defended it saying that it may be because within its limited investigations there was no ‘evidence’ for the intent of genocide.

Acting on behalf of the imperialisms that have the ultimate agenda of genocidal-military unification of the island, the planted TNA leadership misleads Eezham Tamils in understanding the deception behind substituting genocidal crime investigation by war crimes investigation of ‘both sides’, commented Tamil activists for alternative politics in the island.

The crux of the matter is that any genocide investigation would implicitly recognize the existence of the nation of Eezham Tamils in the island. This is unpalatable for both the imperialist agendas of Washington and New Delhi.

The former tries deviation by war crimes investigation, even without the mention of the name Tamils, hoping to achieve its agenda through ‘regime change’. The latter having both imperialist and domestic agendas, is naked in its rejection of any investigation and in practically implementing the genocidal engineering, using the space provided by the absence of international recognition and investigation on the genocide.

If TNA having “Tamil National” in its name is a political party of the people, and as it says if it has no doubt about the genocide committed on Tamils in the island, its primary duty is to tell and prove it to the world and to tell the imperialisms to their face that their approach is the most fundamental of the crimes long committed on Eezham Tamils.

The TNA and the NPC are democratic political entities of a genocide-affected people. They are not dens of ‘legal’ detractors in the service of imperialist agendas. Why such ‘legal’ experts who try to silence the elected representatives of the NPC didn’t face their equals in a tribunal like the PPT that came out with a verdict on Sri Lanka’s genocide and on-going genocide, asked the Tamil activists for alternative politics in the island.