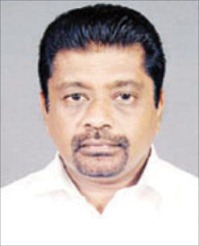 The UNP’s Chief Organiser for Kalutara, Lakshman Wijemanne was scathing in his attack of the Rajapaksa  Administration. He charged that, “since independence we have never had such a corrupt administration.” He cited the “white-elephant” projects of Mattala Airport and Hambantota port as examples of wastage and efforts at “ego boosting” and nothing else. The people he says, are “frustrated and helpless” – highlighted by the surge of ‘people’s power’ in incidents across the nation.

Q: What exactly is the UNP doing? The public sees the UNP as a party that is split, so where is the opposition to lead protests and to challenge the government on essential matters?
A: The UNP has a responsibility as the main opposition party, to ensure that the government is delivering upon and according to the mandate they have received. Some within the party thought that there has to be a reorganisation of the UNP. This was mainly taken up by Johnston Fernando and Lakshman Seneviratne. Ultimately half-way through that process they crossed over to the government.  They also wanted the Constituition of the UNP amended. This too was done. They also wanted elections for senior officials to be held each year. That too was done. The main leaders were thereafter democratically elected.  Many said that the Working Committee was partial towards the party Leader. However, we must take note that at the election the same Working Committee elected Wickremesinghe  as the Leader and Premadasa as the Deputy Leader.

Q: If that is the case then what happened in Panadura?
A: All these protests are organised by a “United” opposition protesting in unison against the government’s  track record. It has been agreed  that only the leaders of the various opposition parties speak. In Panadura, after the others  like Wickramabahu and Ganeshan spoke, it was  Ranil who spoke. There is a tradition that after the Leader speaks there are no more speeches and at protests there usually follows a protest procession. After the UNP Leader went on the procession, Sajith and others stayed back and gave speeches. By doing so they highlighted  that there was a split in the UNP and gave the government media a home run when they were able to highlight the split. The  people therefore are getting confused when they see the split in the party. It leaves them at a crossroad not knowing which turn to take. Such incidents create confusion. If all unite by next year I am sure we can topple this government. Earlier Ranil’s critics said he is not doing enough as an opposition. Now when he has started doing something, these otherwise highly successful rallies are being sabotaged.

Q: Has Sajith Premadasa acted out of turn in addressing the Panadura rally?
A: It is not a question of acting out of turn. More to the point when the various opposition parties agreed to act in concert as a ‘united voice’ against  these price escalations and  cost  of living, it was agreed that to achieve maximum impact, only the leaders of the parties would speak at the rallies.

Q: How are the people of Kalutara reacting to the increased cost of living and price hikes?
A: A majority of the working people of Kalutara are working in Colombo. With the escalation of the cost of living and the hike in bus fares, the problems of the people are  getting worse by the day. In fact the problems of the people in Kalutara are mirrored in every town, every village and every hamlet in Sri Lanka.

Q: Having elected this government what can the people do now that prices are rising and the cost of living is going up? Elections are some years away yet?
A: The people actually are helpless and  frustrated. This is reflected in some instances. Like for example the Dompe Police Station incident, the Payagala accident incident, the incident in Kahawatta, the BOI zone incident in Katunayake – all these show how much the people are frustrated. Never have we seen a government that has lost its direction and is so corrupt as this government. The people have no faith at all in the administration or the ability of the law enforcement agencies. Most projects are carried out on the whims and fancies of a select few in government. A cricket stadium in the middle of nowhere, hotels and conference centres in the Hambantota district, about USD 1 Billion – that is Rs 120 thousand million – has been spent on an airport and sea port. Unfortunately the area does not have the resources to capitalise on these mega projects. Thousands waited for employment at the new Port. Only a  handful have got jobs – that too at a pittance of what they call a salary. So even in their own area the government has successfully misled the people. This is why I say again that with a united opposition we can see a change of government in a short time frame.

Q: But are the people frustrated enough to agitate for change?
A: The people are helpless. However, they are beginning to show signs  of discontent as the hardships increase. More money is being spent on Defence for example. The US Dollar is at an all time high. School uniforms that were given free have now been stopped. Will  the fertiliser subsidy also meet a similar fate to the recent fuel hike? The power sector is going back to the bad days of emergency or stand-by power. The rot has taken hold. It is only a matter of time before the people will say enough is enough.