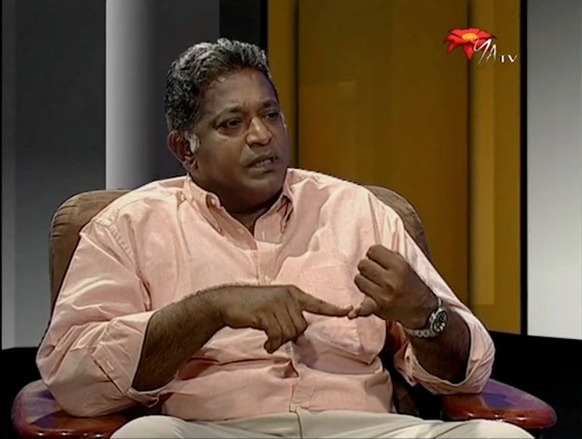 Dr. Paikiasothy Saravanamuttu is the Executive Director of the Centre for Policy Alternatives, the institutional anchor of Groundviews. He is today one of three human rights defenders senior government ministers consider traitors and would like to, as in ancient times, kill, and, inter alia, break the limbs of. Though Sri Lanka’s foreign minister distanced himself from these remarks, the President and his brother, the all-powerful Secretary of Defence, have not expressed a single word of condemnation, or distanced themselves from the minister’s comments, who has openly and repeatedly said he derives his legitimacy from the Rajapaksa’s.

Much of this hate and harm directed against Dr. Saravanamuttu and other key human rights defenders of late has been on account of their participation at the recently concluded 19th Session of the UN Human Rights Council, and in particular, supporting a US sponsored resolution on Sri Lanka. There hasn’t been much informed debate and discussion within Sri Lanka on the contents and genesis of this resolution. Many who joined the protests against the resolution in Sri Lanka, and particularly in Colombo, didn’t even know what they were protesting against. State media launched, and to date, continues with, an incredibly vicious campaign of hate speech not seen since Sri Lanka lost the GSP+ status, which was also due to Sri Lanka’s non-cooperation with, as Dr. Saravanamuttu noted at the time, “what was effectively termed an affront to national sovereignty and pride”. The same ignorance, misplaced patriotism and flawed logic seemingly animated foreign policy and engagement over the US resolution in Geneva.

When Dr. Saravanamuttu is asked as to why anyone should believe his take on, and indeed, support of the US resolution in Geneva, he goes into how the resolution came about and the non-participation of the government in its framing despite an invitation by the US administration. He also flags the history of commissions in Sri Lanka, including a number set up under the present administration, which have failed to result in or influence any meaningful reform of change. We move on to three key questions – the fears of UN interference in domestic affairs as a consequence of the resolution, the perceived hypocrisy of the US in tabling such a resolution against Sri Lanka, when it’s own human rights record is far more blemished and suspect, and why the fullest implementation of the LLRC’s recommendations is championed by those, such as Dr. Saravanamuttu, who when the final report came out, flagged deep flaws and silences over, amongst other issues, the meaningful investigation of allegations of war crimes.

We then talk about how far removed Sri Lanka’s domestic politics and sentiment is from international advocacy and scrutiny of the country’s human rights record, and how whipping up the basest emotions of a largely ill-informed public through propaganda can help Sri Lanka really address outstanding concerns over governance, human rights and accountability into the future. Dr. Saravanamuttu also flags the central challenge of human rights advocacy today, where criticism of government is conflated with, and perceived to be criticism of country.

From this, we move on to address the fall-out of the growing sentiment from government that because the LLRC’s final report has somehow over-stepped its mandate, its implementation will be piecemeal. We also look at what government and some other commentators of late have noted, which is that the US resolution has already led to a hardening of the regime’s stance on reconciliation, and increased the pushback against implementation of the LLRC’s recommendations.

Dr. Saravanamuttu then addresses the question as to why there isn’t greater public agitation and demand for the implementation of the LLRC’s recommendations, and why there isn’t even interest in getting to know the contents of the final report, which to date haven’t been distributed by the government in Sinhala or Tamil (Editors note: Read Who really supports reconciliation in post-war Sri Lanka?).

Even though the three human rights defenders who in the past couple of weeks have suffered the brunt of the hate speech campaign published a letter clarifying their position (Counter-productive propaganda and human rights in Sri Lanka), the attacks continue. We ask Dr. Saravanamuttu why, in the fact of such a vicious and violent response from government, he continues in his advocacy for human rights.

Towards the end of the interview, Dr. Saravanamuttu looks at the possible implications for Sri Lanka’s political stability and economic growth over the non-implementation of the LLRC’s recommendations. We also pose to him the usual response from government over the insistence of meaningful steps towards reconciliation – that it is being unfair to a government which saw the end to a nearly 30 year old war, that steps and measures are in fact being taken but under-appreciated, and that the implementation of the LLRC’s recommendations will take money the government does not have. Finally, Dr. Sarvanamuttu addresses the perception that international advocacy supporting the US resolution in Geneva and the full implementation of the LLRC recommendation is actually a guise for regime change, and ousting the incumbent government from power.