Pointing out that in Sri Lanka "[t]he rule of law continues to be set aside. A huge military machine is yet to be stood down. Glaring war crimes remain to be investigated. Tamils are treated as a subjugated people. Emergency security measures continue, turned against Rajapaksa’s critics even among the Sinhala majority," Sydney Morning Herald (SMH) wondered that, "if Sinhala majority are not protected by law, what hope do Tamils have?"

Full text of the opinion column that appeared in the SMH Friday follows: 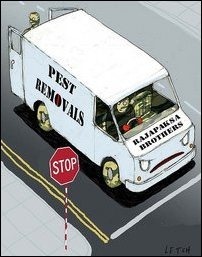 D.R. Kaarthikeyan is a name renowned in India. He was the police officer who led the investigation into the assassination of the former Indian prime minister Rajiv Gandhi in May 1991 by a woman wearing a belt bomb who came up close in a chaotic election rally.

Through clever detective work, Kaarthikeyan’s team from the Central Bureau of Investigation identified the assassin and traced the lines of the plot back to the Tamil Tiger movement then controlling the north of nearby Sri Lanka. Arrests were made and warrants issued against senior Tiger leaders.

Kaarthikeyan is no sympathiser of the Tamil Tigers, who went down to bloody defeat by the Sri Lankan armed forces in May 2009. But like many Indians, particularly those in Tamil Nadu state, he is dismayed by the arrogance of the Sri Lankan government in victory.

”Where there is no justice, there can be no peace,” Kaarthikeyan told me in an email this week. ”Continued injustice and discrimination against minority Tamils gave rise to the birth of insurgency in Sri Lanka … If Sri Lanka or, for that matter, any society perpetuates injustice it is an indirect encouragement for violent movements to be born and grow.”

Nearly three years after the Tigers’ defeat, President Mahinda Rajapaksa has ignored the recommendations of his own commission into the lessons of the 25-year insurgency.

The rule of law continues to be set aside. A huge military machine is yet to be stood down. Glaring war crimes remain to be investigated. Tamils are treated as a subjugated people. Emergency security measures continue, turned against Rajapaksa’s critics even among the Sinhala majority. For this reason, India took the unusual step, at the United Nations Human Rights Council in Geneva last month, of voting with many Western nations in favour of a resolution calling on Sri Lanka to apply its own reconciliation recommendations.

It was a mild resolution, with India watering down one part that called for a UN war crimes office to be opened in Colombo. Yet Rajapaksa sent a team of ministers and officials to Geneva with orders to block it at all costs. The delegation quickly became notorious for its efforts to intimidate human rights activists who turned up to lobby for the resolution.

Another indication of Rajapaksa’s blithe contempt for world opinion came when his government assigned Major-General Shavendra Silva to a UN panel on peace-keeping. Silva was the commander of the 58th Division in the final battle against the Tigers. His troops are alleged to have gunned down Tiger leaders waving a white flag who had been promised safe passage across the battle line, allegedly on orders passed to Silva by Defence Minister Gotabaya Rajapaksa, the president’s brother.

To much outrage in Colombo, the Canadian diplomat heading the UN panel, Louise Frechette, threw Silva out, saying his participation was ”not appropriate or helpful”.

Colombo’s reaction to the human rights council censure has been one of victimisation and outrage, as shown in local newspaper headlines: ”We will not let anyone intervene in Sri Lanka’s affairs”; ”Be united to defeat foreign conspiracies”; ”Do not give India any economic concessions”; ”NGO conspiracy to create anarchy”; ”US resolution has set a very dangerous precedent”. One minister threatened to break the limbs of journalists.

As the even-handed Colombo legal analyst Jehan Perera noted, even many non-government Sri Lankans found it galling how former Tiger organisers in the Sri Lankan Tamil diaspora, who kept silent about the Tigers’ conscription of children and use of civilians as shields during the war, ”metamorphised” into human rights activists at Geneva.

But he points out Rajapaksa’s ingratitude. ”When it fought the war against the LTTE, the Sri Lankan government did receive the political and military support of virtually the entire international community, including the United States that sponsored the UNHRC resolution and India which voted for it,” Perera says. ”This political and military support was given to Sri Lanka on the understanding that after the end of the war there would be structural reforms that addressed the political roots of the conflict.”

So far, however, it’s been business as usual for the Rajapaksas in Colombo, and Australia has just been given a taste of how it works. An Australian citizen of Sri Lankan origin, Premakumar Gunaratnam, who had gone back to help set up a new left-wing political party, was abducted by armed men last Saturday. Another party activist, Dimuthu Attygalle, was removed at the same time.

Thanks to Canberra’s intervention at high levels of the Sri Lankan government, the two were dumped on the streets of Colombo on Tuesday morning, still alive, and Gunaratnam immediately deported. Their accounts put the case as the latest in nearly 60 abductions of a spectrum of government critics in the past few months, carried out by armed men in ”white vans”. Attygalle reports the men who blindfolded and took her off in a white van spoke in police jargon and addressed their chiefs as ”sir”.

Another abduction pinpoints who is running the white vans. On March 26, businessman Sagara Senaratne was abducted by a group that demanded 50 million rupees ($370,000) for his release. But he had a brother-in-law who is a minister in the government, who contacted the president and the defence minister. The driver of the white van got a phone call, and announced: ”Let’s dump him.”

As journalist Tisaranee Gunasekara noted in the Sunday Leader newspaper, the businessman was no ingrate. He thanked the Rajapaksa brothers for intervening. But, as Gunasekara asked, how did they know who to call?

Meanwhile, four months after it was delivered, Sri Lanka’s Lessons Learned and Reconciliation Commission report is joining a long line of previous such reports gathering dust. It has not even been translated from English into Sinhala and Tamil. It is window dressing. If the Sinhala majority are not protected by law, what hope do the Tamils have?

In India, the retired ace detective Kaarthikeyan can see something like the Tamil Tiger movement rising again.

”If the minorities are not treated equally with the majority,” he said, ”insurgency is bound to raise its head in the long run.”