On 20 April 2008 I said in this column “I participated at the Avurudu festival at Mangalagama, Yatinuwara. It was well attended. I felt that all those present were well-dressed and reasonably happy. Piyadasa, the chairman of the village cooperative store, explained to me that the wages of electricians, masons, carpenters etc, had all risen beyond Rs.700 per day, and that there was work. In addition, several youth had joined the security forces and their families were getting a substantial income. This village consists of traditional technical workers, with the tradition going back to ancient times. They however do not own much land. I can’t take what Piyadasa says that seriously, as he was and still is, a loyal SLFP man! But I did not see the desperate looks in people that I witness in the suburbs of Colombo. The war industry is a complete menace to the cosmopolitan suburbs, but it is an income generator for the Sinhala villager. Already around half a million are employed directly or indirectly in war-related activities.” This year too I was invited to the Mangalagama Avurudu festival. I saw the same crowd, with a few additions from the new generations and those outsiders who have come to settle down in the village. But I did not notice the happiness I mentioned last time. Even Piyadasa appeared despondent. Of course the access road is developed with concrete slabs while more houses are reconstructed and modified. But the pressure of rising prices and the jump in interest rates could be seen on all faces. I saw that there was more unity in expressing their anger. They told me that they did not bother to invite any local politician to the event. I was an exception as I am considered to be a villager in the area in spite of my heavy presence in Dehiwela! 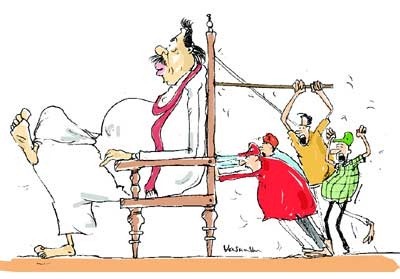 In my speech, I mentioned that the so called development programme of the government is a mess, to tell the least. Mega projects are launched with no income generations; at least not in the short term. A harbour where ships do not dock, coal power stations that do not start, play grounds where no players step in etc., I explained. People were not only amused they started adding other items to the follies of the government. That means people are not only feeling the heavy economic burden but also could see the futility of the future, projected by the government’s activities. Naturally people are angry with the masters who thrive on corruption and waste while they are forced to sacrifice for this mess. Mahinda told them yesterday that the US, INDIA, and EU were his great supporters. Now he wants them to believe that those are international imperialist conspirators who want to over throw his government. Yet he carries out all dictates of these masters to put the burden on the people. Masses are not sure whether this man is a liar or a fool. Or is it both? I could see that even the soldiers are unhappy. They are now expected to do various jobs for which they do not have the necessary training or the orientation.

Slaves of the regime

In reality they have become slaves in uniform to the corrupt regime. While I was there a police jeep came to check the flow of the event and the inspector who led the team was surprised to see me there. He did not know that I come from Moladande, Yatinuwara. The police group said that they were happy to meet me there.

Talking to the villagers, I found that there was confusion in their minds about the abduction of the two leaders of the Frontline Socialist Party. In that sense government has achieved some political advantage by this criminal act of abduction. But I am sure this confusion will rapidly evaporate if FSP does justice to the expectations of the people. Every where the question raised is what further action the opposition is going to take to counter state terror. VV programme of the opposition has awakened the people; but a mass left movement can do a lot more. Even those who are generally conservative expect the left to lead the action programme. They want the left to do the hard work before the UNP led bourgeois alliance can take the lead in a coming election! That is OK, because if the situation is ripe for a revolutionary leadership then the left will get the opportunity to move forward. Of course all ultra leftists imagine that any joint work with the UNP is a disaster for the left. Strangely enough they do not reject common actions with the SLFP, even after the experience of the present government which went to the right surpassing all UNP led governments.