(PTI) Leader of Opposition in the Lok Sabha Sushma Swaraj has apprised Prime Minister Manmohan Singh of discussions with Sri Lankan leadership during the visit of a MPs’ delegation led by her to look into the resettlement and rehabilitation process of displaced Tamils there.

Ms. Swaraj called on Dr. Singh last evening to apprise him of the details of the 12-member delegation’s visit to Sri Lanka and meeting with the leaders and officials there. National Security Advisor Shiv Shankar Menon and Foreign Secretary Ranjan Mathai were present during the meeting. 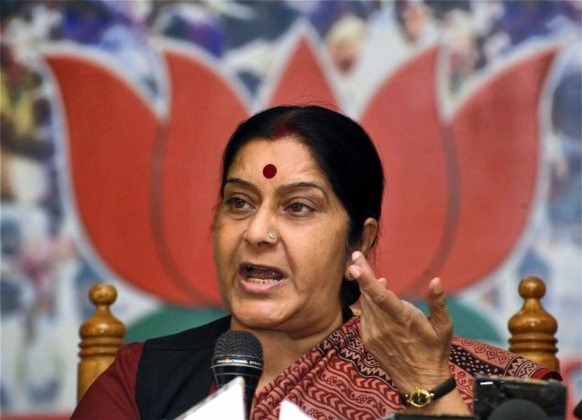 “I would say I am satisfied with our visit to Sri Lanka,” the BJP leader told reporters today. The delegation met representatives of all political parties in Sri Lanka and visited the rehabilitation camp for Tamils.

Ms. Swaraj said the delegation met the women and children living in the camp as the men were away at work. She said the rehabilitation efforts were good and ahead of schedule.

There are three lakh displaced Tamils in Sri Lanka of which only 3,000 have not been rehabilitated.

“We discussed the withdrawal of army from civic life. They come to birthday parties uninvited or enter temples. We also discussed the 13th Amendment,” she said.

Ms. Swaraj noted that the delegation, comprising MPs from different parties, visited several areas across the length and breadth of Sri Lanka during its six-day tour.

The BJP leader said the delegation also pointed out to the Sri Lankan authorities that Lessons Learnt and Reconciliation Commission (LLRC) “is their baby” and so they should go by its recommendations but “they had no answer”.