The leader of the opposition claimed that the Jaffna May Day rally and the protest was a grand success. Over ten thousand participated in the rally in spite of the campaigns of the government, jacked up by racist campaign of Premadasa. The latter was exposed as the crowd he mobilized, with all such drama was not more than two thousand. His treachery cannot be concealed. 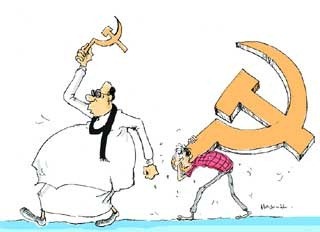 Military leaders kept on saying that under the cover of democratic opposition, terrorists are working. The implication was that those who attend the rally would be classified as terrorist suspects. There were search operations in Batticaloa and Trincomalee where youth, nearly 200, were taken into custody and kept under illegal arrest. On the other hand, pro government Tamil leaders who were accused of para military terror were openly intimidating people. Disregarding all that repression, a significant number of Tamil people have attended the meeting. Hence there was a positive message that was given to the oppressed and suffering Tamil people by this anti racist, united, mass rally. The NSSP contingent that militantly participated in the march and the rally was led by Thirunawakarasu and Dharmasiri Lankapeli. Both were expected to address the rally. Unfortunately  only Dharmasiri could speak; that also without a Tamil translation. In addition, a Lion flag was brought to the stage surreptitiously and displayed by Ranil and Sampanthan. There was no agreement among the parties that participated, to such an action as the meeting was considered to be a protest and a May Day. Neither occasion requires such a symbol which is not accepted as an expression of a democratic unity of the Lankan people. TNA leaders said that it should not be taken so seriously and disputed; in any case as the Lion is the vehicle of Kali it can have a different meaning! But today the Lion symbolizes the domination of Sinhala, claimed to have originated from a Lion man in ancient Bengal, and not Dravidian authority of Kali Amman. Anyway if Tamil nationalist leaders can be pleased with the Lion flag why should others bother?

However something more important is taking place behind the scene. Mahinda has agreed to discuss devolution with land and police powers included, and on that basis the TNA could participate in the proposed Parliament Select Committee. Very likely then the problem will be on the chauvinist parties such as the Hela Urumaya, Weerwansa group-NFP and the JVP. They may have to boycott the committee as it is going to start with the idea of 13+. Mahinda has succumbed to the pressure of India and global powers, and has agreed to consider ways of giving devolution with land and police powers.

Under so much pressure from the masters and continued confrontation with the working class due to economic burdens, he may have decided to take a left turn on the national problem, expecting the support of all progressive sections of the society. This is a repetition of what JR did in 1986 where he called an All Party Conference to resolve the national problem. That conference created the idea of Provincial Councils with devolution of powers. MR has ultimately decided to imitate JR of 1987. But much blood has been spilled on this problem since that time, and this time the players are very different. At that time the Left parties in the country were together in a front named United Socialist Alliance. Within that, the biggest section was that of Mahajana Party of Vijaya which was not a Marxism oriented party.

On the other hand, at that stage the largest oppositional party was the SLFP  that was vehemently opposed to devolution at that time and worked closely with the JVP. Now that party is in power with Mahinda. Obviously, the majority of that party today will stand with Mahinda. So, who will come to the streets to stop Mahinda betraying the heroic war of Sinhala chauvinism? Who will take to the streets to cry that Mahinda is letting down the Sinhala youth, who gave their youth to snatch back from Tamil terror, the north-east of Lanka? It is tragic, but it is funny as well to see how Mahinda kneels down and takes the arm of Sonia.

In my May Day speech I said the following:

“Mahinda claimed to eliminate terrorism and went into a genocidal war against Tamil insurgency. One hundred and fifty thousand or more were killed and the Vanni Tamil civilization was razed to the ground. He claimed this will bring prosperity to Lanka. We said it was the greatest misfortune of Lanka. This terrible situation today is the result. With the repression of the Tamil insurrection, the minds of the people in the south were filled with chauvinist dreams. On that basis, enormous power was taken over by Mahinda.

This power is used to trample the rights of workers and other oppressed masses. State terror became a common thing while the north was submerged in military rule. Mahinda had the backing of the security agreements that was established with America, Israel and India…

Even in Lanka there is no alternative that could be given by the bourgeoisie opposition. Neither Ranil nor Premadasa could give a way out as both are seeking a solution within capitalism. Mahinda is doing well according to global masters. Human rights are the only problem which needs facial change! Then why seek an alternative within capitalism? We must be prepared to go beyond capitalism to seek a solution. That means we must install a proletarian power with the support of all oppressed. Such a power can bring liberation to the oppressed nationalities. Also it will bring peace and prosperity and collaborate internationally to go for socialism.

We must start with the struggles developing in this country. For the sake of struggle we have to go into alliances; we cannot be sectarian in the unfolding struggles of the masses. We can establish a proletarian power with the support of all who are oppressed. Obama put forward the slogan ‘yes we can!’

Mahinda also repeated that recently. Of course we are the only people who could really say yes, we can. But it is a negative slogan.

We need to take positive steps to establish a proletarian power. As we are in praxis, we must say ‘yes we will.’