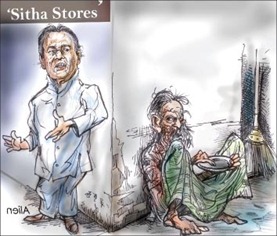 Will the corrosive Rajapaksa ethos prove to be a far more abiding yoke than even Rajapaksa rule?

Will Rajapaksa politico-administrative mores become transformed into governance-traditions, and thereby survive the eventual fall of the Rajapaksa regime?

Though partisan-politicisation of state entities began well before Rajapaksa Rule, the Lankan state always had key-niches which were immune to this malaise. But, as the Siblings intensify their efforts to impose their familial-seal on the Lankan state, these hitherto impregnable citadels are succumbing, one after another, with nary a ripple.

Until last month, the Governor of the Central Bank personified this degeneration of the pillars of the Lankan state into handmaidens of Familial Rule.

Now his position of pre-eminence is being challenged, by the Public Trustee.

According to JVP parliamentarian Sunil Handunetti, “the Public Trustee’s Department has paid Rs. 144,000 to ‘Sitha Stores’ for a suit for Prime Minister D. M. Jayaratne to be worn during a visit to Vavuniya… (It) also spent Rs. 269,000 on books and clothes distributed during the tour” (Sri Lanka Mirror – 27.5.2012).

The Public Trustee is, well, the Public Trustee; the title says it all. Until the Rajapaksas unleashed their single-minded effort to annihilate the lines of demarcation between state and government and state and the Ruling Family, no political muck besmirched the Public Trustee’s Department. Now this hitherto august institution is becoming a petty-cash supplier for the rulers; “The auditor general has questioned the public trustee’s spending of Rs. 500,000 on a pandal to mark the president’s induction in office…” (ibid).

This latest development – and our collective-indifference to it – is indicative of the distance travelled by Sri Lanka since the commencement of Rajapaksa rule, less than seven years ago.

Partisan-politicisation hampers the smooth functioning of the state; it makes for unintelligent decision-making, breeds inefficiency and injustice and erodes public confidence. Democracy, the rule of law and intelligent-governance cannot survive when a state becomes an appendage of a ruling family.

The Sunday Observer of May 13th carried on its front page the obituary of President Rajapaksa’s maternal-aunt, who also happened to be the mother of Sri Lanka’s Ambassador to Russia, Udayanga Weeratunga.

The AG’s Department, under Presidential control, is yet to enable the implementation of a 6-month-old judicial order to arrest parliamentarian Duminda Silva.

Public confidence in the independence of the judiciary took another beating when it was revealed that the man at the centre of the share-transaction scandal, the Chairman of the NSB, is the spouse of the Chief Justice. Traditionally chairmen of state-owned banks are political appointees. The spouse of a Chief Justice being offered such a political-position, accepting it and having to leave it under a cloud must be a Sri Lankan First.

The regime is reportedly planning to seek a new IMF loan, for US$500 million. Several rounds of price-hikes can be expected in consequence. This same Rajapaksa government packed off the IMF some years ago, boasting that Mahinda Chinthana had made Sri Lanka immune to the global financial storm. When a foreign exchange crisis became imminent in 2009, the Central Bank, under its unique Governor, Ajith Nivard Cabraal, launched a ‘Patriotic Bond’ targeting the Sinhala Diaspora. The inimitable Bandula Gunawardana toured England promoting the bond which aimed to raise US$600m. That harebrained scheme, failed, predictably, compelling the regime to return to the IMF as a supplicant.

The 2011 A Level result re-corrections are still incomplete. A tome will be needed to detail the mess in secondary education.

None of these are political issues, but matters of public interest which should concern every Lankan of all political hues, and none.

The signature Rajapaksa confluence of Family-centric politicisation and Sinhala supremacism is weakening the Lankan state nationally and disabling it internationally. As Sri Lankans, we have a right and a duty to be outraged at these wanton excesses and abuses, because they are beclouding our present and damaging our future.

Unfortunately that necessary outrage is conspicuous by its absence.

In a context characterised by public-indifference, these reprehensible Rajapaksa practices can persist until they become Lankan norms. In 10 years time, would a young Lankan regard the appointment of Rajapaksa-relations/acolytes to key state positions as anything but normal? And when the Rajapaksas depart the political scene – as they will someday – might not their successors embrace many of these execrable habits, to our common detriment?

We, the Sinhala majority, who should be outraged at the structural undermining of the Lankan state, are indifferent to that very real danger. Instead we are hot-on-the-heels of non-existent threats.

When asked about the proliferation of abductions in recent months, Defence Secretary Gotabaya Rajapaksa declared, “Most of them – if you go through the history of these people…they are rapists, murderers, these are underworld criminals. Now in the underworld there are many rival groups. This is the easiest way – saying abducted and putting the blame on the government” (The Sunday Leader – 27.5.2012).

Only terrorists died in the Fourth Eelam War; only criminals are white-vanned. Terrorists must be killed; criminals deserve to be abducted.

When guilt falls not on the perpetrator but on the victim, the crime becomes a non-crime.

The war-winning army commander was re-categorised as an anti-patriot, before he was persecuted. To justify the planned mass-eviction of Colombo’s poor, they are being labelled as health hazards and eye-sores, undermining the hygiene of the non-poor and impeding Colombo’s beautification.

The rioters who tried to destroy the Dambulla mosque blamed ‘Muslim-expansionism’. Whenever churches are attacked, fingers are pointed at ‘conversions’.

Three years after the war was won, in the absence of normalisation and a political solution, most Tamils remain un-reconciled and alienated. Meanwhile, the legatees of 1956 are hard at work antagonising the Muslims. A madrasa was threatened in Dehiwala, and, again, the politically connected culprits have got away scot-free.

Who will be the next target in this insane search for the ‘inimical’ and the ‘undesirable’?

As recent race-riots in Israel, targeting black-African migrant workers prove, de-humanising and blaming the victim, once begun, cannot be contained. For millennia, Jewish people experienced the full horrors of statelessness and demonisation. Having finally obtained their own state, they began to persecute Palestinians, depicting and treating them as the ‘Alien-Other’. Last month, that racist mindset claimed a new set of victims. A rightwing Israeli parliamentarian described African migrants as a ‘cancer’, while ordinary Israelis used words of loathing against these workers which would have been familiar to their own forefathers, in their precarious existence as the hated/feared ‘Other’.

This refusal to accept the humanity of another human, this habit of turning crimes into non-crimes by blaming the victim is an old and universal menace. Every time a country succumbs to it, bloodshed and destruction ensues.