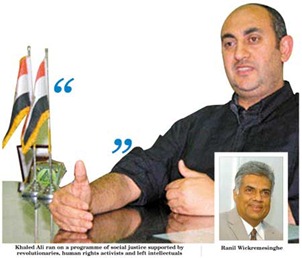 Website Verite Research ( [email protected] This e-mail address is being protected from spambots. You need JavaScript enabled to view it ) said in a recent report: “Newspapers report that former army commander Sarath Fonseka has already initiated discussions with a view to developing a common political front, adding he is planning to meet with two powerful UNP figures in this regard once he is freed; Lakbima May 20 p1.”  It carries the report under the head “Speculation” but I am inclined to call it inevitable, unless SF and RW are both of unsound mind – which is not impossible. Or is SF meeting rebel UNPers to engineer a split? The government is barren and at a dead end, its popularity is at a low, but will it be an anti-government walkover for an opposition that doesn’t get its act together? No Sir! There is a vote bank for Rajapaksa in rural areas and in Sinhala communal strongholds; a divided opposition is all he needs to scrape through for a third term.

The outcome of the first round of Egyptian presidential elections has stunned the radicals who took over Tahir Square and forced the fall of Mubarak. Ahamed Shafiq, a one time prime minister under Mubarak and the military’s favoured man came second with 24% of the vote close behind the populist Muslim Brotherhood backed candidate Mohammed Mursi, 25%. The radicals, the left and progressive nationalists, simply split their votes among five candidates. Mursi and Shafiq benefited from the revolutionaries’ divided votes. Furthermore, deep town versus village rifts were also apparent in the poll.

“They made a mistake by not unifying” said the April 6 Youth Movement, a leading force in the uprising, “We said from the beginning, we need one candidate for the revolution, not two or three.” Despite several rounds of negotiations, persuading some to withdraw in favour of a common candidate came to nought. Egypt’s left seems to be as frighteningly sectarian and fratricidal as Lanka’s.

Indeed, revolutionary candidates together had far more votes than Mursi or Shafiq but were fragmented into five. Hamdin Sabbahi (22%), one of the favourites came third, and the modern Islamist Aboul-Fotouh (19%), fourth. The others who gained only small votes are the charismatic liberal leftist Khaled Ali, Hisham El-Bastawisi and Abul Ezz El-Hariri. These three and Sabbhai are leftists. Abul-Fotouh supported the revolution but is not a leftist. Sabbahi won Cairo and Alexandria while pro-Muslim Brotherhood Mursi came in a distant third in both Egypt’s major cities.

We now have the absurd spectacle where pro-revolution candidates, who among themselves polled over 50%, have to watch a final runoff between an Islamist (Mursi), albeit a moderate one, and a throwback to Mubarak’s Neanderthal times (Shafik). Lanka beware; learn from Greece where SYRIAZ, a broad left alliance, is tipped in opinion polls to win the rerun parliamentary elections of June 17.

The public euphoria that greeted SF’s release was somewhat muted compared to what had at one time been anticipated – no big marches and demonstrations carrying the General shoulder high, and so far no massive public meetings. The reason is simply that time has passed, the mood of early 2010 has abated and the public is taking things easy; watching. The current political spectrum is also unstable. I have two matters in mind; the stability of the UNP led alliance that leans on Mano Ganesan’s DPF, Bahu’s NSSP, Siritunga’s USP, and on an understanding with the TNA, is not assured.

Secondly, though the left in this front wants an alliance with the bourgeoisie for democratic objectives – which is correct – and rejects governmental commitments, it also speaks of the need for left unity; but it is doing next to nothing about the later task. Attention and effort are focused on the democratic front with the bourgeoisie; what about simultaneously drafting a programme in alliance with other leftist entities? The mood in the FSP and Lanka’s large non-party left is critical of Bahu and Siri these days because of this neglect.

It is in this context that RW-SF trends take on significance. SF has little residual strength and really has no option but to ally with this front. If he tries to go it alone in the hope of unnerving RW into breaking his current alliance and rushing to the succour of the General, he will fail, provided RW has the nerve. But that’s the question; does RW have the nerve to withstand Sinhala pressure if this is the tool the General chooses to panic RW? I am not saying SF will choose this strategy, nor that RW will panic; I only think it is a possibility. If so what becomes of a left that has neglected left unity?

I will close with a comment on the ongoing negotiations in Egypt that Lanka needs to learn from. There is nothing in heaven or earth that is new – not even how to implement LLRC recommendations! Mursi has no hope of winning the second round unless he sues for support from the revolutionaries. Seemingly, this option is already-chosen and the Brotherhood is adopting a more progressive and reconciliatory tone to align with revolutionary forces, gain their endorsement, and a percentage of their voters. Mursi would have to agree to give the revolutionaries a hand in writing the new constitution and compromise on a more liberal vice president, prime minister and cabinet composition. He would also have to agree to goals on women’s rights, civil rights and secularism.

By way of analogy, if RW and his allies have the nerve, it is the General who can be called to order; he has little prospect of emerging as an independent third force even with a JVP tail.

If the revolutionaries (throughout this piece the word revolutionary means one who participated in the 2011 Egyptian uprisings) can force such a compromise out of Mursi they should go for it; much better than opening the door for a Mubarak era dinosaur.

Things will not be easy if Mursi wins; the dialectic of the Egyptian Revolution has already shown how complex historical progress is, but at least revolutionaries must stop behaving like downright sectarian asses; so must Lanka’s left.