More than 50% of the participants, who took part in a protest held opposite the District Secretariat of Ki’linochchi district on Thursday, were parents of missing persons, allegedly abducted or arrested and held incomunicado by the occupying Sri Lankan military. The protestors who carried the photos of their missing kith and kin, put forward three main demands to the SL State and to the United Nations Human Rights Council, to end Sinhala colonisation in the Tamil homeland, to ensure freedom of movement to the civilians to resettle in their own houses and to reveal the whereabouts of their loved ones. The protest, organised by the Tamil National Alliance, saw the participation of Tamil National Peoples Front (TNPF) and Democratic Peoples Front (DPF).

The Sri Lankan State, which has not recognized the resolution passed during the UN Human Rights Council (UNHRC) sessions in March this year, is continuing with the same trend of subjugating the Tamil people, Maavai Senathiraja, a leader of the ITAK told the gathering.

While Mavai Senathiraja of the TNA was harping on the US-tabled Geneva resolution, Selvarajah Kajendren of the TNPF criticised the TNA for having failed to set the course in correct direction.

By failing to attend the UNHRC sessions and by simply calling for the countries to back the resolution, the TNA not only failed in setting the trend, but also shares the responsibility in the post-Geneva scenario for having brought the accountability process onto an LLRC-based track, which is full of traps, Mr Kajendren said. While xtending TNPFs support to agitations being organised by the TNA, Kajendren also appreciated the TNA for taking part in the protests organised by the TNPF.

Mano Ganesan, the leader of Democratic Peoples Front (DPF) from the Western province together with Councilor, S. Bhaskara of the DPF, attended the protest expressing solidarity with the TNA. Civil activists from Jaffna and elected members of the civic bodies in Ki’linochchi also took part.

Around 400 people braved the harassment by the occupying SL miltiary and the police to take part in the protest. 200 of the participants were parents of missing persons.

A 10-member delegation selected by the TNA hierarchy handed over an appeal to the residential representative of the UN at Ki’linochchi. 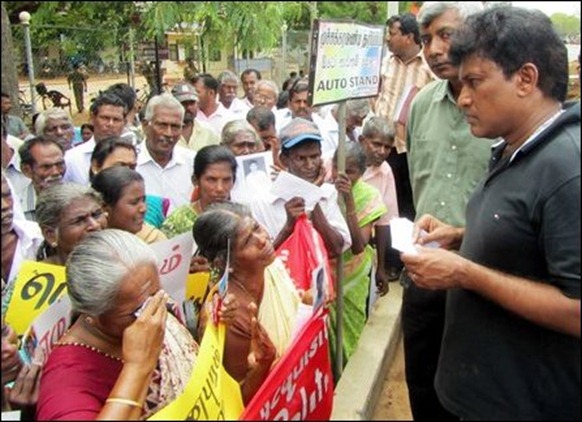 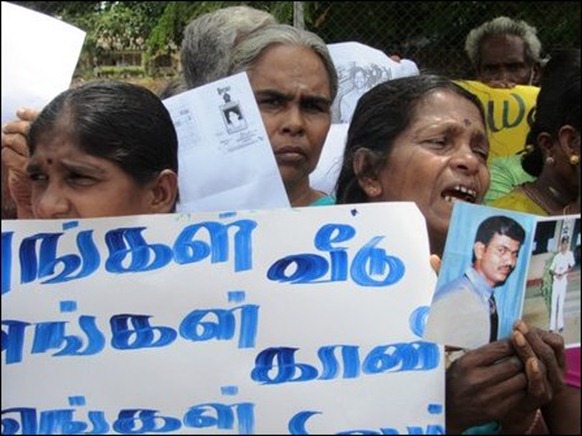 English translation of the appeal, addressed to the UN Human Rights Council (UNHRC):

Following are key points expressed in the Tamil letter of appeal by the TNA.

The land grab, occupation and ethnic subjugation, which were taking place for more than 60 years in the predominantly Tamil-speaking Northern and Eastern provinces in the island of Sri Lanka, are now accelerated, especially after the end of the war in 2009.

These acts are being undertaken in a systematic and intended way by the Sri Lankan state.

The Sri Lankan state and its armed forces are forcibly occupying and appropriating the lands that have been historically inhabited by the Tamil people.

The affected civilians have not been resettled in their homes.

At the same time, the number of SL military forces stationed in this region is un-proportionally high, compared to the number of civilians.

The heavy SL military presence has become a day-to-day threat to our people.

The military is also interfering in civil affairs.

The Sri Lankan state is trying to justify its land grab and occupation as measures for ‘national security’ and ‘development’.

By adopting new tactics on suppressing a nation, Sri Lanka, sidelines the expectations of the Tamil community and the international community on reconciliation, reconstruction, protection of human rights and power sharing.