The Mahinda Rajapaksa government is faced with an interesting predicament over the impeachment motion presented against Chief Justice Dr. Shirani Bandaranayake.

The motion and its charges have now boomeranged on the government with the call for the complainants to prove their accusations against the Chief Justice.

The fact that a majority of the governing party members had signed the motion without even seeing the charges does not bode well for the government. 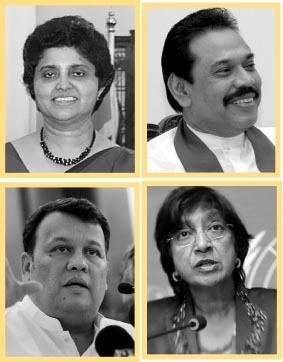 Most senior government members have claimed they did not have any knowledge of the 14 charges in the impeachment motion until it was handed over to Speaker Chamal Rajapaksa and included in the Parliamentary Order Paper.

As soon as the motion against the Chief Justice was handed, one by one the charges started to fall like dominos.

The fact that the Chief Justice’s charge sheet had been drafted with loopholes has now become a concern for the governing party.

A senior opposition Parliamentarian who is a lawyer by profession explained that most of the charges in the motion were weak accusations and the government would have to convincingly prove their case.

“One of the key concerns is to see how a bank had revealed confidential information like account details of an individual,” the MP said.

It is at this point that a case filed by then Deputy Speaker Gamini Fonseka against a bank in the 1990s came into the spotlight. Fonseka at the time had sued the bank and won compensation after charging the bank of releasing his personal account information.

“Fonseka won the case at the time and there is a similar situation in the motion against the Chief Justice,” the Parliamentarian observed.

As for another charge against the Chief Justice that she had purchased an apartment, the MP explained that she had acted with the power-of-attorney of another person and there was nothing wrong in that.

It is in this backdrop that the Chief Justice’s lawyers, Neelakandan Associates last week publicized a statement from Bandaranayake.

The lawyers stated thus in summary, “(a) our Client has declared all her operative bank accounts having assets in her declaration of assets and liabilities; and (b) after her appointment as a judge of the Supreme Court our Client has not received any remittances from anyone in Sri Lanka or abroad save and except the remuneration as a judge and the remittances from her immediate family. Thus clearly there has been no financial impropriety on her part. Our Client totally denies the other allegations and can easily refute them. Our Client instructs us to state that she will, as always, continue to duly and properly discharges her duties without fear or favour; she will do so, independently, impartially and fearlessly in accordance with the Law.”

Be that as it may, Bandaranayake will also have the opportunity of further explaining her position before the 11 member Parliamentary Select Committee (PSC) that would probe the charges against her.

Out of the opposition political parties, the JVP is yet undecided on whether it would participate in the PSC.

The PSC once fully constituted would commence hearing the Chief Justice’s case. Rest assured it will become one of the most sought after issues to be focused on in the coming months.

The UNP has already called for local and international legal observes to monitor the PSC proceedings and has also asked for the proceedings to be opened to the media.

The government however has not responded to the request.

The Chief Justice meanwhile, seems to have the support of political parties sans the UNP, which is yet quiet on the entire issue.

Even the Mahanayakes of the four main sects last week wrote to President Rajapaksa requesting him to reconsider the impeachment motion that has been brought against the Chief Justice.

They have stated in their letter, “We kindly request you to reconsider analytically, the need for an impeachment motion handed over to the Honourable Speaker, against the Chief Justice.”

The letter further stated,  “History too has confirmed, that when dealing with the Judiciary which contributes immensely to protect the rights of all, including the common citizens of the present democratic society, action should be taken carefully and patiently without harming the trust placed by the public in the Judiciary.”

The Deputy Secretary of the LSSP, Anil de Zoysa had told the media that the matter was discussed at the party politburo meeting and that it was decided at this meeting that the LSSP should not be party to the impeachment motion.

The LSSP had then informed Parliamentarian Y.G. Padmasiri who signed the motion on behalf of the party to write to the Speaker informing him that he would be removing his name from the list of signatories.

Nevertheless, the entire impeachment drama behind the impeachment motion, which according to a governing party MP is due to the Supreme Court determination on the controversial Divi Neguma Bill, was summed up well by Senior Counsel Gomin Dayasri.

Dayasri has stated, “The Executive appointed a spouse without allegedly (sic) the necessary qualifications to hold high posts and was removed for reasons now subject to inquiry. The executive installs many without merit in favoured positions for extraneous reasons and the country suffers. Presumption being such that appointments are made in search of benefits or goodwill – donor or recipient cannot be unaware of the side effects. Big Foot has put his shoe on the wrong foot. Equally blameworthy is the acceptance of such dubious office, which creates unwanted obligations and makes clean hands unhygienic”.

The Divi Neguma Bill apart, it is the unholy alliance that was since built between the Executive and the Judiciary and the eventual fall out that has resulted in the current situation.

Coming into election years, the government is firm in its stance that it does not have any deterrents, including the Judiciary, standing in its path.

Interestingly, impeachment motion or otherwise, the three member Supreme Court Bench headed by the Chief Justice had given a suitable verdict with regard to the Divi Neguma Bill.

Former Chief Justice Sarath N. Silva said that Bandaranayake’s judgments on the Z-score issue and Divi Neguma had been proper.

The initial anticipation that the country would be pushed to hold a referendum to get the Divi Neguma Bill was soon put to rest.

The government last week said it would not hold a referendum to legalize the Divi Neguma Bill.

The government noted that it would introduce amendments at the committee stage in Parliament as directed by the Supreme Court.

UPFA General Secretary and Minister Susil Premajayantha told a news conference that the Supreme Court had acted differently in its judgments on more controversial constitutional issues like the 13th Amendment.

He observed that the Supreme Court had not directed a referendum when the 13th Amendment was introduced.

However, the government minister assured that the instructions given in the second ruling by the Supreme Court on the Divi Neguma Bill would be followed and amendments would be introduced to make the Bill consistent with the Constitution.

The government nevertheless, is determined to have its way. In this instance it is to implement the Divi Neguma Bill and to remove the Chief Justice from office.

The government it seems has its work cut out till the end of the year.

The recent statements and action of the government has once again placed Sri Lanka in the limelight where the international community is concerned.

Therefore, news that the UN High Commissioner for Human Rights Navanethem Pillay had said that she would head a team to Sri Lanka in January next year to look into the alleged war crime charges as reported in the Indian media, only adds to the government’s workload.

India’s DMK party had issued a statement last week to the Indian media that Pillay was planning a visit to Sri Lanka next January.

Pillay had reportedly informed this, when a two-member delegation from the DMK led by its Treasurer M. K. Stalin met her in Geneva last Monday.

Stalin, had been accompanied by DMK Parliamentary Party Leader T. R. Baalu, and during their 35-minute meeting with Pillay, they had handed over the resolutions adopted by the party-backed pro-Sri Lankan Tamils outfit TESO, approved by party chief M. Karunanidhi, and had briefed her about the plight of Tamils affected in the last phase of the Eelam War in Sri Lanka.

A DMK release had also stated that Pillay told the delegation that in consultation with UN Secretary-General Ban Ki-moon an appropriate decision would be taken with regard to the alleged human rights violations in Sri Lanka.

Pillay’s visit will be ahead of the UN Human Rights Council’s (UNHRC) sessions next March where Sri Lanka’s report at the recently concluded Universal Periodic Review (UPR) and the review of the resolution adopted at the 19th UNHRC sessions are to be taken up.

Engagement with the UN

At the UPR that concluded last week, Sri Lanka rejected 98 recommendations submitted by countries, the troika tasked with serving as rapporteurs for Sri Lanka’s UPR said in its draft report.

The Ambassador had said that Sri Lanka had explained why several recommendations were rejected.

Meanwhile Cuba, China and Russia had raised concerns over what they said were attempts to use the UPR process to create a rift in the Council and target a particular country.

After the draft report was adopted Sri Lanka’s Special Envoy for Human Rights, Minister Mahinda Samarasinghe had said that Sri Lanka would send a set of voluntary pledges to the UN Human Rights Secretariat within two weeks.

He had also said that the government would keep the Secretariat updated on the progress of the post-war developments in Sri Lanka.

Meanwhile, the United Nations Working Group on Enforced or Involuntary Disappearances has had discussions with Sri Lankan officials on individual cases and on the issue of enforced disappearance in general.

The expert panel had held meetings with representatives of the governments of Guatemala, Japan, Spain, Sri Lanka and Togo to exchange views on individual cases and on the issue of enforced disappearance in general.