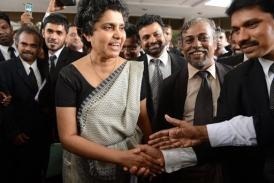 Sri Lanka’s chief justice has described herself a "fearless judge" and vowed to fight charges of financial and professional misconduct, according to a leaked response to her impeachment.

Shirani Bandaranayake, whose case has raised concerns that the government is trying to control the courts, told a parliamentary committee last week there was not an "iota of consideration of the facts" in the allegations.

"The charges are levied to damage the reputation of an independent and fearless judge," she said in a letter to the committee that was posted on Colombo Telegraph news website on Sunday.

A lawyer for Bandaranayake, who declined to be identified, confirmed the report was authentic and added that the chief justice was determined to clear her name following the impeachment motion backed by 117 ruling party MPs.

Bandaranayake, the first woman to be Sri Lanka’s top judge, had been accused of 14 charges, including failing to declare around $250,000 in foreign currency.

She said the money belonged to her sister, an engineer working in Australia who was buying an apartment in Colombo, and she also dismissed allegations that she had hidden wealth in undisclosed bank accounts.

Sri Lanka’s government and the Supreme Court have clashed over the case.

The Supreme Court also irked President Mahinda Rajapakse last month with a decision that effectively scuppered a bill giving more powers to the economic development minister, who is the president’s younger brother Basil.

The United Nations Special Rapporteur on the independence of judges, Gabriela Knaul, has urged Colombo to reconsider the impeachment moves.

Bandaranayake, 54, faced the first day of the closed-door hearing by the Parliamentary Select Committee on Friday. The next hearing has been scheduled for December 4.