The Heroes Day observed by Eezham Tamils on 27 November to remember their fallen fighters, falls on a full moon day this year, coinciding with the Kaarthikai festival of lights observed by Tamils since ancient times. Sri Lanka that has made a practice of banning even routine religious observations in the temples of the occupied country of Eezham Tamils on the Heroes Day, dares this year to forbid the Kaarthikai festival observations too. Occupying Sri Lanka’s practice of banning temple rituals, including toll of bells on the Heroes Day, started first in Nov 2009, while New Delhi’s Foreign Minister S.M. Krishna was visiting Jaffna. New Zealand Tamils appeal to the UN on the continued cultural genocide of their kith and kin in the island. 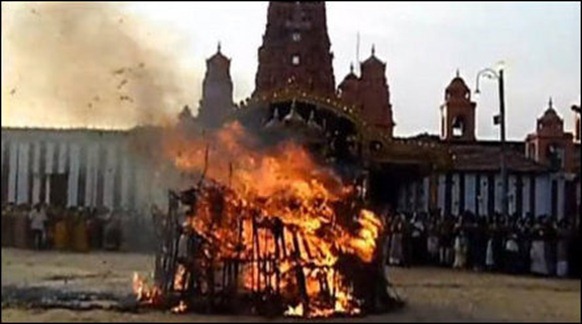 Appealing to the UNSG Mr. Ban-ki-Moon, with a copy to UNHCHR Ms. Navaneetham Pillay, Mr. A. Theva Rajan, Co-ordinator of the Tamil Action Front, New Zealand (TAFNZ), argues with evidence on Sri Lanka’s cultural genocide of Tamils being extended to new fronts in the post-war times.

Full text of the appeal by Mr. A. Theva Rajan to the UN:

We would like to bring to Your Excellency’s notice the continuing cultural genocide being extended to two new fronts in post war Sri Lanka. Both are inter-related.

The martyrs in the war were honoured with tombs which were bulldozed by the army in post war times – a very insulting barbaric act on the part of the Government of Sri Lanka.

November 27 as the date on which the first fighter died is observed as martyrs day. This almost coincides with the Karthikai Thirunal, a festival of lights observed again by the Tamils from very ancient times. The ancient Sangam classics of the Tamils refer to this festival of lights as being celebrated in every home with pomp and glory – the houses and entrances being illuminated with oil lamps mounted on banana tree trunks. According to the Sangam works it also was the day when husband s who went abroad for trade and wealth returned to join their families, a great day for family reunion.

It is a great function in Hindu temples and is a special day for worshippers of Lord Muruga or Karthigeya. It is called Karthiga Mangalaya among the Sinhalese and they too celebrate it with great enthusiasm. The Dalada Maligawa Temple authorities distribute oil and other necessities to smaller temples in the Kandyan region. It is a great festival in the Kandyan kingdom of yesteryears. Even the King went in the great night pageant and procession with decorated elephants. There is a solemn festival at the famous Muruga/Kartigeya temple of Kataragama/Kathirgamam.

The occupying army in the North and East in this post war time are preventing Tamils from celebrating this Festival of Lights because it coincides with the Martyrs day. Even temples are prevented from conducting poojas with bells tolling and other grandiose.

Mr Thevarajan has also sent photographic evidences to the UN on the continuity of the culture of hero worship among Tamils since ancient times. The images are presented above with captions added by TamilNet.

Tamils celebrating the festival of lights on the full moon day of the month of Kaarthikai finds reference since the times of earliest stratum of Tamil literature.

The festival is known in Tamil as Kaarthikai vi’lakkeedu meaning the offering of lamps on the Kaarthikai day. The month of Kaarthikai (November-December) gained its name because the full moon day of that month would fall when the moon joins the Kaarthikai constellation, which is a group of six stars (Pliedes).

What is celebrated as Theepaava’li today on the new moon day of the month Aippasi (October-November) doesn’t have references of antiquity in Tamil literature.

Lighting the Kaarthikai flame is observed in all the Hindu temples in South India and in the island of Sri Lanka. The Kaarthikai festival in Thiruva’n’naamalai temple in Tamil Nadu, where a huge lamp is lighted on top of the hill, is famous among the Saivites.

Apart from the temples, lamps are lighted in the streets as well as in the houses.

Among Eezham Tamils, it is a common practice to erect banana stems in front houses and light the lamp in coconut halves placed on them. Besides, torches on Ki’luvai sticks are also placed at different places of the house premises. There is a belief that ancestors would visit the house on that day and they need light. Some even cook fish on that day and place it as offering to the ancestors.

The lamp lighted in temples of Eezham Tamils is called Chokkap-panai, because dried palmyra palm leaves are used to make the flame.

The following lines from the Changkam Tamil literature Akanaanoo’ru refers to the way the Kaarthikai festival was celebrated among ancient Tamils.

In the broad sky free of rain clouds, prominent with the ‘little rabbit’ blot shade, the moon in full will join the six-star constellation (Kaarththikai/ Pliedes). On that midnight, lighting lamps on the streets, and raising garlands, the gathering of the old valorous village would celebrate. He will come for me to celebrate the festival together.