The 40th day mourning for Al-haj M.A. Samsudeen, who passed away on 25 November at the age of 82, is to be observed at Addaa’laich-cheanai in the Ampaa’rai district of Eastern Province on Thursday. Mr. Samshudeen dedicated nearly 40 years of his life to education in the East as well in the North and retired as Batticaloa’s Additional Director of Education. His education and career in the East, North and Tamil Nadu is one such that would inspire anyone of the larger perspective shared by Muslims and Tamils. 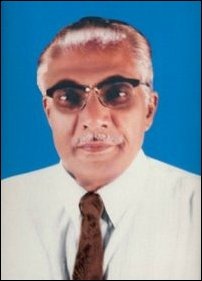 Born as the eldest son of Muhamadu Aliyaar, who was also known as Akkiraasanar at Aaddaa’laich-cheanai in 1931, Mr Samsudeen, after studying at a local Muslim Tamil school, went to Sivananda Viththiyaalayam and Central College of Batticaloa and to Alexandra College in Colombo for his higher schooling.

After working for a brief period as a Tamil announcer at the Ceylon Broadcasting Corporation in the early 1950s, his interest in education took him to Madras Christian College in Chennai to return with a B.Sc. in Zoology. He was the first science graduate of his locality in the Ampaa’rai region.

Bent on serving to the education of his region and community, Samsudeen taught as a science teacher and served as principal at various Tamil and Muslim Tamil schools at Moothoor, Ea’raavoor, Akkaraip-pattu, Kalmunai, Vanthaa’ru-moolai and Addaa’laich-cheanai in the East and at a school in Matale.

Since the late 1970s, he was in the educational administrative service in the East as Education Officer, Principal of the Addaa’laich-cheani Teacher Training College and Chief Education Officer for Batticaloa, before retiring as Additional Director of Education.

As a teacher, educationalist and social worker, served for the emancipation of his region and people, many remember him thankfully.

Passed away in Colombo, his burial took place at his native place at Addaa’laich-cheanai.