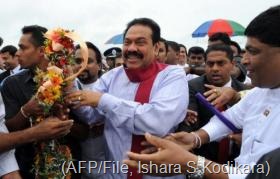 Sri Lanka intends to ask for another loan from the IMF of $1 billion after foreign investments in infrastructure failed to materialise in the formerly war-torn island, a top official said Friday.

The government will discuss borrowing another billion dollars from the International Monetary Fund this year after drawing down a previous $2.6 billion IMF bailout loan six months ago, Treasury chief Punchi Banda Jayasundera said.

"We are asking the IMF to extend budget support," Jayasundera told reporters in Colombo, explaining that the money would be used for government spending.

An IMF team is expected in Colombo later this month for talks.

Jayasundera said delays in construction work had slowed the in-flow of foreign direct investment (FDI) which stood at about a billion dollars in 2012, 50 percent down from the government’s original target for the year.

Sri Lanka is still facing international censure over allegations that up to 40,000 civilians were killed in 2009 in the final months of its ethnic war pitting the largely Sinhalese army against Tamil separatists.

The government denies the claims.

A 2009 IMF bailout was secured when the island’s foreign reserves crashed to a dangerously low level of $1 billion, but Central Bank of Sri Lanka figures showed reserves of $8.6 billion by September last year.

The government has revised down its growth forecast for 2012 from 7.2 percent to 6.5 percent after a drastic slow-down in imports following sharp increases in import tariffs in the face of a $10-billion trade deficit.

Sri Lanka’s economy grew 8.3 percent in 2011, up from 8.0 percent in 2010, the first full year after government forces crushed the Tamil Tiger rebels.