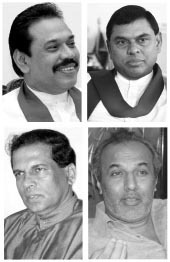 The disillusionment of senior government members was evident by the recent statement made by the General Secretary of the SLFP and Health Minister, Maithripala Sirisena.

Sirisena has been facing many attacks against him from within the government. The simple reason for it was the support wielded by him amongst senior SLFPers. Given the current state of the government, Sirisena’s comment cannot be considered lightly.

In fact, the silence maintained by senior members of the government has not gone unnoticed by the decision makers in the government.

Most senior government members refrained from placing their signatures on the impeachment motion against the Chief Justice.

A clear division is now visible in the Rajapaksa government between the old and new guard.

The failure of the new guard to consult the old guard for its political wisdom is seen as one reason for the continuous failures of the government.

As pointed out by a senior government member, the Rajapaksa government has managed to create one major issue that has given a black mark to the administration. From the failure to implement the Lessons Learnt and Reconciliation Commission (LLRC) report recommendations, to the impeachment motion, the killing of prisoners in Welikada, the arrest of Jaffna university students, the government has been unable to tread a path towards creating political stability even four years after the end of the war.

Instead, the Rajapaksa government has found solace in the blame game where the media, opposition political parties and the international community have been blamed for ‘pulling its leg’.

Amidst all these issues, the internal conflicts in the government is now reaching bursting point and in need of immediate solutions.

The internal crisis in the Rajapaksa government took a turn for the worse at last week’s Cabinet meeting. The government was dealt a severe blow with the sudden realization that it might not have the required two-thirds majority in parliament to pass the controversial Divi Neguma Bill on the 9th.

A few weeks earlier, Economic Development Minister Basil Rajapaksa emphasized to the Cabinet the need to pass the Divi Neguma Bill in the House with a two-thirds majority.

In order to pass the piece of legislation with a two-thirds majority in the House, the governing UPFA would need at least 151 votes in favour.

However, the government enjoys 161 seats in the House and the governing party was therefore initially confident of passing the Bill without a problem.

During last week’s Cabinet meeting, several governing party members, namely the SLMC and the three leftist parties in the government said they would not vote in favour of the Divi Neguma Bill, which they claimed interfered with powers vested with the provincial councils under the 13th Amendment.

The Rajapaksa government was hit by the reality that it would not have the support of 12 of its members – eights SLMC members and four leftist parties’ members – to pass the Divi Neguma Bill.

The government would be in such an event, be left only with 149 seats in the House, which is less than a two-thirds majority.

The SLMC and the leftist parties claimed that they would not be able to support the Bill unless the clauses that dealt with subjects under the provincial councils list were amended.

Soon after the Cabinet meeting, the UPFA in usual fashion started its negotiations.

The first to be approached was the SLMC. The party till late last Friday held a meeting of its High Command to decide on the party’s stance on the Divi Neguam Bill.

It is the SLMC that will be faced with a dilemma when deciding on its stand when the vote on the Divi Neguma Bill is taken in parliament.

The party had called for explanation from its members in the Eastern Provincial Council who had voted in favour of the Divi Neguma Bill and has even threatened disciplinary action against them.

However, it is the resolutions adopted at the SLMC convention held on December 29th at the S. De S. Jayasinghe Hall in Dehiwela that would pose a problem for the party representatives in parliament to find some excuse to vote for the Divi Neguma Bill.

If the SLMC decides to vote in favour of the controversial bill, party leader, Justice Minister Rauf Hakeem would therefore find it difficult to justify to his party membership, the reason for the sudden U-turn in the party decision a few weeks after the convention.

Another matter that Hakeem would have to explain to his Muslim brethren is how his party could support a government that has not taken any action against attempts by certain extremist elements to create a communal backlash with the Muslims.

The recent incidents related to the Bodu Bala Sena, a group of Sinhala Buddhist chauvinists who have commenced a campaign against Muslims, has created much concern among the Muslim community and the onus is now on Hakeem and the SLMC to show whether they wielded any power as members of the government to prevent another communal backlash.

Amidst all these issues, the government is once again considering the appointment of an acting Chief Justice.

Angered by the Court of Appeal verdict last week that the Supreme Court interpretation that the parliamentary select committee (PSC) could not probe a judge, the decision makers of the Rajapaksa government decided to go ahead with the impeachment proceedings.

It is learnt that the government is looking at appointing an acting Chief Justice soon after parliament debates the impeachment motion most probably on the 10th and 11th.

NFF Leader and Construction and Engineering Services Minister Wimal Weerawansa to feel the people’s pulse subtly put out the government’s decision. He said last week that a new acting Chief Justice should be appointed immediately.

He told a news conference that the present problem would develop into a constitutional crisis.

Weerawansa has accused the Chief Justice Dr. Shirani Bandaranayake of examining a case to which she was a party said it was unethical.

It is in this backdrop that some members of the governing party have said that the Chief Justice’s impeachment drama would soon come to an end.

Nevertheless, the government would still have the hurdle of facing objections by lawyers and judges in the event an acting Chief Justice is appointed by forcibly removing Dr Bandaranayake.

The Bar Association of Sri Lanka (BASL) has already passed a resolution that it would not accept the appointment of a new Chief Justice if Dr Bandaranayake were removed in an illegal manner.

The BASL members have even vowed to take the matter internationally in such a scenario.

The Rajapaksa government therefore would not find it easy to appoint an acting Chief Justice given the focus on the matter locally and internationally.

Ironically, the Rajapaksa government seems to have found an unlikely ally in the main opposition UNP.

UNP’s decision to not accept the Court of Appeal notice for its members of the PSC to appear before court was criticized by many opposition politicians including some members from the UNP.

The ‘unholy’ alliance between the government and the UNP in relation to the impeachment of the Chief Justice is likely to backfire on the UNP sooner than later, given that this year would also see several elections, at least at provincial level.

The UNP has received a black mark with some comments made by government ministers.

Youth Affairs Minister Dullas Alahapperuma last week expressed gratitude to the UNP for the party’s decision not to respond to the Court of Appeal notice. Even Weerawansa commented on the UNP’s decision not to appear in court.

He has said the UNP took a wise decision since it was a party that expects to form a government.

He pointed out that the JVP and the TNA that appeared in court as representatives of the PSC wanted to push the country towards anarchy.

The JVP however has vowed to take its fight for judicial independence to the streets and has organized a protest march and rally in Colombo tomorrow (7).

When considering the focus of the international community on Sri Lanka, it is evident that the Rajapaksa government has not been good with the timing of its decisions.

The Rajapaksa government is still in the review period of the US backed resolution that was adopted at the 19th session of the UN Human Rights Council (UNHRC) sessions last March.

The resolution is to be reviewed this March at the 22nd session and the Rajapaksa government has managed to add more issues to the list of concerns of the international community.

To add to the human rights concerns are now issues related to democracy and the independence of the judiciary.

It is unfortunate that a patriotic government like President Mahinda Rajapaksa’s is in fact paving the way for interference from the international community through its actions.

Comments by a UN official last week indicates that Sri Lanka would have to be well prepared to face the UNHRC in Geneva in March.

The UN Special Rapporteur on the independence of judges and lawyers, Gabriela Knaul, expressed serious concern about the impeachment proceedings against the Chief Justice and the recent attacks against lawyers who have been fighting for the independence of the judiciary in Sri Lanka.

According to information received by the independent expert, attacks and threats against members of the judiciary and lawyers, as well as interference in their work, have dramatically increased over the past few months.

“The recent steps taken by the executive and legislative towards impeaching the Chief Justice appear to be the culminating point of a series of attacks against the judiciary for asserting its independence,” Knaul said in a statement. “It is of high concern to me that the procedure for the removal of the Chief Justice of the Supreme Court is extremely politicized and characterized by lack of transparency, lack of clarity in the proceedings, as well as lack of respect for the fundamental guarantees of due process and fair trial,” she observed.

“I would like to reiterate that article 107 of the Sri Lankan Constitution, read together with Standing Orders of Parliament, is contrary to international human rights law, as already noted by the Human Rights Committee in 2003,” she stressed.