Responding to a question posed by TamilNet at a Human Rights Watch press meet in London on Tuesday, UK director of the HRW, Mr. David Mepham stated that the sexual violence perpetrated by the Sri Lankan state forces against the Tamils was not random but had a method in it, adding that it was deliberate and premeditated. In an exclusive interview to TamilNet, Mr. Mepham further said that HRW stood for an independent international investigation into human rights abuses committed by the GoSL, terming the LLRC “a bit of a farce”, and opining that the “culture of impunity” in Sri Lanka needs to be addressed by the International Community. However, Mr. Mepham said that HRW “has not taken the view that this is genocide,” but only that systematic human rights abuses were committed by the Sri Lankan government, blaming the LTTE also for human rights violations. 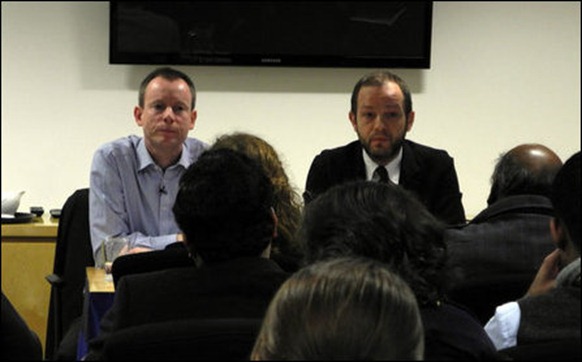 Mr. Mepham spoke along with Benjamin Ward, Deputy Director of HRW for Europe and Central Asia at the press meet which saw the release of a HRW report on sexual violence against Tamils committed by Sri Lankan security forces.

Titled “We will teach you a lesson”, the 140 page report contains 75 individual accounts of Tamil women and men who were sexually abused by the Sri Lankan state forces.

The release of the report was also accompanied by the screening of a short documentary of the testimonies of two rape survivors, a Tamil female and male.

During the Q and A session, when asked by TamilNet whether HRW saw the cases of sexual violence as more than the violation of individual human rights, as a systematic, planned policy directed at the Tamils by the Sri Lankan government with full knowledge of the civilian authorities, Mr. Mepham said that it was deliberate and premeditated.

“The sexual violence that we are talking about in this report, it is not random, it is not some criminal element engaging in violence. There is method in it. It’s deliberate, it’s premeditated. This is coercive, designed to intimidate, to instil fear, to extract information, sometimes to extract confessions… This is a deliberate policy,” he said.

Stating that it is not known now how high up in the government is there the knowledge of these systematic crimes, he emphasised that different branches of Sri Lanka’s security forces were involved in them.

“They are involved in the rape. They are facilitating it, they are supporting it, they are participating in it. This is deep, entrenched and it is systematic. It is actually rape and sexual violence as a form of torture that is being perpetrated by the Sri Lankan security forces,” he added.

Following the press meet, in an exclusive interview to TamilNet, Mr. Mepham talked about the need of an independent international investigation to probe into and a put a stop to systematic sexual violence committed on Tamils by the Sri Lankan forces.

TamilNet: Now, this report has compiled several individual cases of violations. You have also told that there is a pattern in it and it has been conducted in a systematic manner. TamilNet and many other Tamil media organizations have been arguing that these patterns indicate genocide and that this charge must be investigated. What is your opinion on this?

Mepham: Well on that particular issue, Human Rights Watch has not taken the view that this is genocide. We have certainly taken the view that systematic human rights abuses have been perpetrated by the Government of Sri Lanka against elements of the Tamil population. We’ve documented that in considerable detail over the years. But we’ve also…I mean we’re an independent impartial human rights organization, we’ve also documented abuses committed by the LTTE over the years as well. So our job as a human rights organization is to look at rights abuse, to document it, to expose it wherever it happens.

We’ve been very concerned that in the final months of the Sri Lankan civil war and early 2009, the best estimates are that something like 40,000 civilians were killed, mostly at the hands of the Sri Lankan military. That was the finding of the UN Panel of Expert’s report, the report given to the UN Secretary General. There’s been a complete failure on the part of the Sri Lankan government to investigate that, to hold anybody accountable, for anyone to face justice for those crimes and that’s why Human Rights Watch and others are urging, very strongly, that there needs to be an international mechanism to investigate and hold people accountable because the so called Lessons Learned and Reconciliation Commission is frankly a bit of a farce. It’s not a serious body, it doesn’t have real power, it is not interested in investigating and holding anybody accountable.

The Sri Lankan government was still cut a bit of slack by the international community on that one with people saying “well let them have their chance to sort of address this”. I think it’s pretty clear now, they are not prepared to use that mechanism or indeed any other mechanism to properly get to the bottom of what happened and the involvement of Sri Lankan military and security forces in that abuse.

Hence, the need for more concerted international action including at the upcoming meeting and discussion on Sri Lanka at the Human Rights Council, which will take place in a few weeks time. It’s very important that governments around the world come together, and demand that there is a strong resolution and strong international follow up action, that there is an international mechanism to investigate abuses in Sri Lanka and to hold people responsible for those abuses to account.

Mepham: Yes, yes. That was essentially what was called for by the UN Panel of Expert’s report, he said that the panel, three people on the panel said, there needed to..there was evidence that around 40 000 civilians may have died but there needed to be a proper international investigative mechanism, international investigation to look into what happened, to identify who was responsible for abuse, who committed the crimes and to hold those individuals accountable. And of course, the Sri Lankan government goes to great lengths to dismiss all that, to deny the abuse, to say they are not prepared for that to happen.

It will only change if there is really concerted international pressure on Sri Lanka, of the kind that we have not seen up to this point. Which is why it is kind of particularly shocking that lots of governments around the world are going to go off to a glitzy summit in Sri Lanka in November and sit down and eat and drink with Mr. Rajapaksa, at the same time as that government has completely failed to address the problem of impunity for war crimes.

TamilNet: Now as regards the cases of sexual abuse. Many months back last year, TamilNet came out with a feature which showed that women, especially former fighters belonging to the LTTE were being systematically targeted by the Sri Lankan state, by the military and by its police and many of these extreme cases included forcible impregnation which even led to many of them committing suicide. Do you think that this needs to be addressed very clearly at international fora?

Mepham: Yes. All of these kinds of…I can just talk with more authority about the abuses that we’ve documented in the report we’ve launched this week. There are lots of other allegations and claims of abuse that have taken place as of the last few years. All of them need to be properly investigated. Claims of that kind that are made, it is incumbent on the Government of Sri Lanka to investigate them and hold people accountable.

When it’s not prepared to do so, then there should be an international investigative mechanism. Because I think there is powerful evidence that this is not, as I said in the remarks at the press conference, this is not sort of random or just criminal elements. There is method in this abuse, it’s directed, it’s targeted, it’s designed for a purpose which is to intimidate and to inflict suffering and terrorize and to extract information. On that note, sexual violence of that kind is a war crime under international humanitarian law and needs to be treated as such and the people responsible for it need to be held to account.

TamilNet: What is the responsibility of the Co-Chairs and the world powers which managed the peace process? Do you think that they have a moral and political responsibility to step in and address the question of the Tamils now?

Mepham: Yes. They all have a responsibility. I mean, governments around the world have a responsibility to uphold international human rights, that’s what they’ve signed up to. Not only in terms of their domestic practice but in terms of the influence and pressure they bring to bear internationally. So all of these governments, particularly those that are involved in this process have an obligation to press on human rights concerns, to ensure proper accountability in the way we haven’t seen up until now and to ensure that people responsible for war crimes are held to account and that’s, there is a culture of impunity in Sri Lanka which really needs to be addressed and that’s one of the things that we are calling for as a sort of central recommendation from our report.

While welcoming the attempt of the HRW to document systematic sexual violence perpetrated against the Eezham Tamils by the Sri Lankan state, political observers expressed regret at the refusal to term genocide as genocide.

More than the Tamils, the International Community of Establishments know the full nature and extent of the structural genocide being perpetrated on the Eezham Tamil nation. While organizations still try to give a picture of ‘war crimes of both sides’, what is brushed under the carpet is the war crimes of all sides, especially that of the Establishments in giving legitimacy to Sri Lanka’s genocidal war on the Eezham Tamil nation, they said.

The Sri Lankan government will definitely deny this report as is expected from a genocide perpetrator, but it was the refusal of the ICE to recognize the nationhood, sovereignty and territoriality of the Eezham Tamils which is the core reason why Sri Lanka was able to commit such crimes with genocidal intent on the Tamil nation and foster the “culture of impunity” with abandon regime after regime, they further opined.