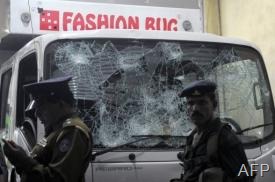 Elite police commandos patrolled a suburb of the Sri Lankan capital Friday after hundreds of rampaging Buddhist hardliners torched a Muslim-owned business in the latest in a series of mob attacks.

At least three people were wounded when mobs from the ethnic Sinhalese majority stoned and later set fire to a clothing store in Pepiliyana on Thursday night, police spokesman Buddhika Siriwardena said.

"We have deployed extra units of STF (Special Task Force commandos) and police to guard the area," Siriwardena told AFP. "The situation was brought under control within a few hours."

No arrests had been made, Siriwardena said.

The authorities have not declared a motive for the attack, but official sources said it appeared to be part of the ongoing targeting of minority Muslim businesses by a group of Sinhala-Buddhist hardliners.

The Muslim Council of Sri Lanka, an umbrella organisation of Muslim groups, said tensions had been heightened by Thursday’s attack.

"It has created a fear psychosis among the Muslims," council president N.M. Ameen told AFP. "We know a majority of the (Buddhist) people do not support this type of activity."

Army units were called in to disperse the mob as tension gripped the area.

The attack came a day after Sri Lankan police set up a hotline to tackle complaints about anyone suspected of "inciting religious or racial hatred".

Mobs hurled stones at another Muslim-owned clothing chain near Colombo in January while Muslim businessmen have also complained of random stone-throwing, intimidation and calls for the boycott of their shops.

President Mahinda Rajapakse, who is a Buddhist, urged monks earlier this year not to incite religious hatred and violence.

The United Nations estimates that Sri Lanka’s ethnic civil war claimed at least 100,000 lives between 1972 and 2009, when Tamil rebels were crushed in a major military offensive.