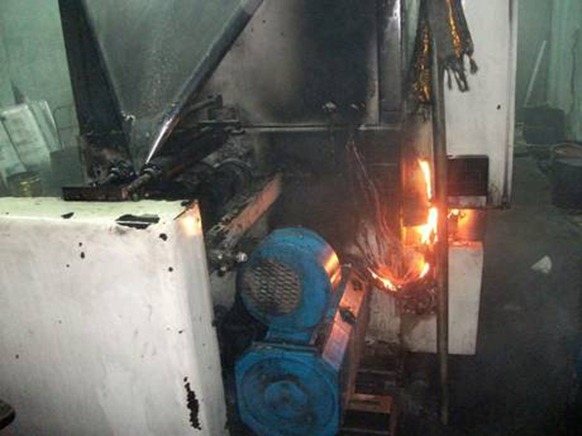 An outspoken Tamil newspaper in northern Sri Lanka whose premises have been repeatedly targeted, and its employees killed, was attacked by armed men who stormed into the building and set the printing presses ablaze. It is the second attack on the newspaper in two weeks.

Reports said a gang of three men armed with guns entered the premises of Uthayan in Jaffna before dawn on Saturday and scared away the staff. The men then fired their weapons and set fire to a stack of newspapers awaiting delivery and the printing presses.

“This morning at around 4.45am three people with arms – two were carrying pistols and one was carrying what looked like an AK-47 – came into the building and scared away the security staff,” said the paper’s owner, Eswarapatham Saravanapavan, speaking from Jaffna.

He added: “They shot at the panel board and put kerosene all over the place. Four printing wheels got burned. The main part of the machine was destroyed. They also threw press oil everywhere.”

The assault on the headquarters of Uthayan, or the Rising Sun, followed an attack earlier this month on its distribution office in Kilinochchi. In that attack four members of staff were hurt, one of them seriously.

Uthayan has a record as an outspoken Tamil newspaper that supports political autonomy for Sri Lanka’s Tamil population. It has been repeatedly attacked, most seriously in 2006 when gunmen entered the Jaffna building and opened fire, killing two members of staff. A total of six employees have been killed in the past decade.

When The Independent visited the Jaffna offices of Uthayan in November 2011, its editor, MV Kaanamylnathan, revealed that he had not left his office since 2006 as a result of security concerns. The only exception he made was a visit to his heart specialist once every three months. “For that, I have to make to make special arrangements,” he said.

Instead, he and his wife lived in a small room set up alongside the newsroom. In the room where the news meetings were held by editors, staff had retained the bullet-scarred conference table as a reminder of the 2006 attack

Although the newspaper is considered Tamil nationalist, over the years it has faced threats from the Sri Lankan military, Tamil militants and unidentified thugs allegedly linked to pro-government paramilitaries. Between 1990 and 1995, the city of Jaffna, located at the tip of Sri Lanka, was controlled by the Liberation Tigers of Tamil Eelam, whose decades-long insurgency for a Tamil homeland was crushed in 2009.

“We have a relationship with all parties, even the military. We carry all the stories and all the statements,” said Mr Kaanamylnathan.

The paper’s owner, Mr Saravanapavan, who is a member of the Tamil National Alliance and a member of parliament, said he believed the paper could have been attacked by either the military or groups linked to the military. He said the paper had recently been publishing articles about the increasing take-over of business and industry in the north of Sri Lanka by the armed forces.

He added: “The Provincial Council elections are happening in September. The government is aware that the existence of the newspaper is adverse to its interests and it has been doing what it can to halt the newspaper.”

A spokesman for the military, Brig Ruwan Wanigasooriya said the allegation by Mr Saravanapavan was untrue. He said the army will cooperate with the police in an investigation.

“There is widespread speculation regarding the attack….Some speculate that the military was involved in either carrying out or supporting this attack.  We reject such allegations,” he said in a statement.

He added: “It is reiterated that the Sri Lankan military forces are duty bound to protect the constitutional rights. Freedom of expression is one of the guaranteed rights. The military has no requirement to engage in acts against freedom of expression.”

Despite the end of the civil war in 2009, attacks on media workers have not halted. Earlier this year, investigative journalist Faraz Shauketaly, who holds both British and Sri Lankan citizenship, was shot by three men who broke into his house in a Colombo suburb.

The 54-year-old investigative reporter works for the Sunday Leaders newspaper, which also has a reputation for being critical of the government of President Mahinda Rajapaksa. He required surgery to remove a bullet. Amnesty International has estimated that at least 14 journalist have been killed in Sri Lanka since 2006. Many more have fled and fear a climate of impunity.

Mr Saravanapavan said he arranged for an alternative printing press and vowed that Sunday’s edition of Uthayan would appear. He said: “I will be going ahead.”