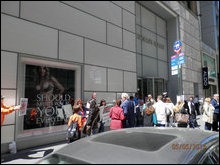 Targeting brand label garment stores including Victoria Secret and Gap which sell Sri Lankan made apparel, Tamil activists held protests in New York, San Francisco, Washington D.C., and Toronto in front of both stores Sunday, organizers of the protest said. The protesters held placards and distributed leaflets describing the war-crimes and crimes against humanity committed by the Sri Lanka government, as shoppers, aware of the recent tragedy of garment workers in Bangladesh, were drawn in increasing numbers towards the protesters. 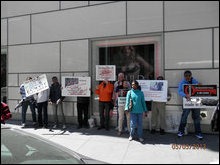 "We believe we are having a noticeable impact on making shoppers aware of the human rights record of the Sri Lankan Government, and its complicity in war-crimes, and we will continue to expand our campaign against stores that do business with Sri Lanka," the protest organizer in Washington, Mr K Sundar, told TamilNet.

The boycott protests which started after May 2009 killings of more than 80,000 Tamil civilians (Petrie Report) have continued unabated in several major cities during the last four years.

The protesters pointed out the economic pressure faced by the

apparel industry in Sri Lanka as a sign of the importance of the protests. 2012 Sri Lanka earnings reports show that exports contracted by 7.4 per cent in 2012. Industrial exports declined by 7.8 per cent mainly due to the reduction in textiles and garments, which has the largest share, nearly 40%, in total export earnings, by 4.8%.